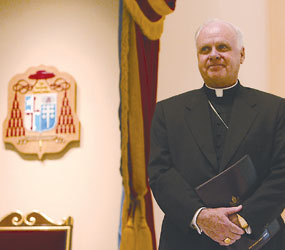 Pope Benedict XVI appointed Archbishop Edwin F. O’Brien of Baltimore as Pro-Grand Master of the Equestrian Order (Knights) of the Holy Sepulcher of Jerusalem, based in Rome. The appointment was announced simultaneously in Rome and in Washington, Aug. 29.

“News of this appointment came as a shock to me and I am still adjusting to the reality that effective today I am no longer the Archbishop of Baltimore,” the archbishop said at an Aug. 29 news conference at the Catholic Center in Baltimore to discuss the appointment. “Until learning very recently of my appointment as grand master of the Holy Sepulcher, I was prepared and eager to serve out the remainder of my episcopacy as Archbishop of Baltimore, a title I have been honored to hold and a role in which I have been blessed to serve.”

The order is a chivalric organization dedicated to promoting and defending Christianity in the Holy Land, supporting the Latin Patriarchate of Jerusalem and responding to the needs of Catholics in the region. Its origins date back to the First Crusade.

He succeeds in the post American Cardinal John P. Foley, who resigned and retired in February as head of the international order for health reasons. Cardinal Foley returned to Philadelphia to live permanently earlier this year after having served in Vatican posts since 1984.

Though he ceases to be archbishop of Baltimore effective with the appointment, the pope named him as apostolic administrator of the archdiocese until his successor is named.

“It has been a singular privilege to serve as archbishop of Baltimore,” Archbishop O’Brien quoted from his letter of acceptance to Pope Benedict. “It is with a heavy heart that I will be departing. … I pray that I will carry out the will of God and that of your Holiness in preserving the faith in the Holy Land.”

At the news conference, Archbishop O’Brien said he will be splitting his time between Rome, where the order is headquartered, and Baltimore, “but I will be spending some time in the Holy Land as well.” He said he has visited the Holy land four times, most recently about 10 years ago.

He said the appointment of a residential bishop of a major archdiocese to the Holy Sepulcher post shows the importance Pope Benedict places on the presence of the church in that region of the world. “We’re diminishing in numbers every year. There are some misunderstandings among faith groups there, and the Holy Father wants to assure everyone in the Holy Land of his support and his desire to see peace brought about, and to see that the good work that can be done will be done.”

Archbishop O’Brien acknowledged Cardinal Foley’s work as his predecessor. “He brought great joy and enthusiasm to the position and accomplished much in his effective leadership of the order. … Since learning of my appointment I have spent some time with Cardinal Foley and I am sure I will be turning to him from time to time for his continued good counsel.”

In a statement released today, Cardinal Foley said, “I could not be happier that he is my successor,” citing Archbishop O’Brien’s “experience and splendid dedication as priest and archbishop.”

Archbishop O’Brien was appointed July 12, 2007, by Pope Benedict as the 15th Archbishop of Baltimore to succeed Cardinal William H. Keeler, who had served as archbishop of the nation’s oldest diocese from 1989 to 2007. Archbishop O’Brien took on the mantle of leading the archdiocese when he was installed Oct. 1, 2007.

For the 10 years prior to his Baltimore appointment, he was Archbishop for the Military Services, which serves 1.5 million Catholics, including all U.S. Armed Forces and their families, as well as 170 Veterans Administration hospitals and U.S. government employees overseas.

The Order of the Holy Sepulcher plays an important role in the preservation of the Holy Land and the practice of Christianity there. Though it counts its beginnings to the 12th century, it was reorganized and revitalized in the 1960s by Popes John XIII and Paul VI. Blessed Pope John Paul II enhanced the status of the order again, making it a public association of the faithful, according to the website of the order.

As pro-grand master of the order, Archbishop O’Brien will travel extensively, visiting lieutenancies (local chapters) of the order throughout the world, as well as visiting the Holy Land and Jerusalem to provide witness for the church’s presence and support.

The head of the order is traditionally the Cardinal Grand Master, so it is likely that Archbishop O’Brien will become a cardinal. By naming Archbishop O’Brien “pro-” grand master, Pope Benedict seemed to indicate that he would be named a cardinal during the next consistory, which has not been scheduled but will likely be held sometime in 2012, at which time the “pro-” would be dropped from his title.

According to the 2011 Catholic Directory of the Archdiocese of Baltimore, the archdiocese includes 115 members of the Order of the Holy Sepulcher. The Archbishop has served as Grand Prior of the Mid-Atlantic Lieutenancy of the United States, based in Washington, D.C., since 2010.

Edwin Frederick O’Brien was born April 8, 1939 in the Bronx, N.Y., son of Edwin Frederick O’Brien Sr. and Mary Winifred O’Brien. He was one of three children, including brothers Ken and Tom (both now deceased). He attended St. Joseph’s Seminary, Dunwoodie, N.Y., where he received his bachelor of arts degree, a master of divinity and a master of arts. He was ordained a priest of the Archdiocese of New York on May 29, 1965, by Cardinal Francis Spellman.

His first assignment was as a civilian chaplain at the United States Military Academy at West Point, N.Y. He would later be commissioned to become a military chaplain and in 1970, he officially became an army chaplain with the rank of captain, serving with the 82nd Airborne Division. From 1971 to 1972, he served a tour of duty in Vietnam with the 173rd Airborne Brigade and then 1st Cavalry Brigade. From a base of operations in the middle of a jungle, he and a Protestant minister flew by helicopter to defensive outposts where they would provide for the spiritual needs of soldiers.

He was director of communications for the Archdiocese of New York in the early 1980s and was instrumental in the establishment of the archdiocesan newspaper, Catholic New York. He was named a monsignor (prelate of honor) by Pope John Paul II in 1986, and served two stints as rector of the seminary at Dunwoodie, 1985-89 and 1994-97.

Archbishop O’Brien is known for his theology and knowledge of church history. His dedication to evangelization permeates many of the programs in the Archdiocese of Baltimore, and respect for life and vocations are also high on his agenda. His episcopal motto, “Pastores Dabo Vobis” (“I will give you shepherds”), from the book of Jeremiah, reflects the time he has spent in seminary education and his desire to encourage vocations, though he acknowledged that he had only ordained seven men during his time here. He hopes he has laid the groundwork for his successor to do more.

In Baltimore, he has also emphasized planning for the future, conducting an extensive review of the schools system and a strategic planning process that led to school consolidations and new programs at several schools. At the news conference, he acknowledged the trauma caused by restructuring the school system. “I know the trauma it caused in many homes and among many of the schools we had to consolidate and the children who have been affected by that to this day. I don’t regret doing it, but I regret that we had to do it,” he said.

During his tenure, Archbishop O’Brien also began a process of studying parishes and the way they work together. “It will go ahead. … It’s going to be at the grass-roots level,” he said of the process.

He has been outspoken against the death penalty and same-sex marriage and he took the City of Baltimore to court, successfully overturning legislation that targeted pro-life pregnancy counseling centers.

Nationally and internationally, he has been involved in seminary visitations in the United States and Ireland, and in the past few years has spoken in several venues on the need to move toward a world without nuclear weapons.

At the press conference, the archbishop said that among the high points of his tenure here were getting to know the community here. “When I said it’s been a welcoming home, it really has been. I couldn’t have asked for a better reception. … Even during the difficult moments, people have been nice and understanding, and I’ve gotten great cooperation.”

For more information on the Equestrian Order of the Holy Sepulcher, visit tinyurl.com/cr-sepulcher.