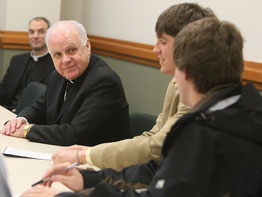 Leading a March 12 Lenten reflection at Calvert Hall College High School in Towson, Archbishop Edwin F. O’Brien told 150 teens they must be open to whatever Christ asks of them. It won’t always be easy, Archbishop O’Brien said, but if they say yes to Jesus he will help satisfy a spiritual longing in their lives.

Archbishop O’Brien spoke about the Gospel passage in John in which Jesus met the Samaritan woman at the well. Even though she was a known sinner, Christ spoke with her and asked for a drink of water. She listened to him, and he promised to provide a “living water,” Archbishop O’Brien said.

“Jesus sees not just a sinner but a potential disciple,” said Archbishop O’Brien. “He sees much more in us than we see in ourselves.”

The archbishop reminded students that God has a plan for each of them. It’s their job to listen and respond, he said.

The reflection was part of an ongoing morning Lenten program sponsored by Calvert Hall’s campus ministry department. Students from all grades have been meeting every Wednesday morning before class to talk about their faith and reflect on the theme “Everybody thirsts … only one satisfies.”

Following his talk, Archbishop O’Brien sat in on one of several small-group discussions. The students told him how nine of them traveled to Browning, Mont., in February to volunteer as tutors at a school located on a reservation for the Blackfeet Tribe. The school is sponsored by the Christian Brothers, the same religious community that runs Calvert Hall.

The students reported that there was a 60 percent high school dropout rate and a 70 percent unemployment rate on the reservation.

“We need more of what you’ve done,” said Archbishop O’Brien, who earlier had viewed a video presentation about the outreach trip.

When the archbishop asked what conclusions the students could draw about “Christ’s style” from the Gospel account of the woman at the well, one student said Jesus showed “a sense of compassion.” Another added that Christ is “open,” while a third said “he doesn’t just preach.”

After the Lenten program, Archbishop O’Brien had breakfast with some of the students.

Nick Jaramillo, a 17-year-old senior, called it “cool” to spend time with the archbishop.

“He helped us relate our trip to Montana to the Bible,” he said.