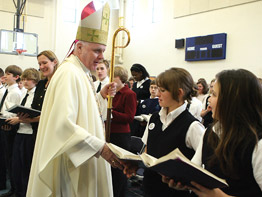 Pointing out that there are more than 2.4 million students enrolled in 7,800 Catholic schools around the country, Archbishop O’Brien said he was proud of the sacrifice parents make to give their children a Catholic education. He praised teachers and pastors for their hard work supporting Catholic schools.

In his homily, Archbishop O’Brien drew on the theme of Catholic Schools Week, “Light the Way,” to encourage youngsters to follow the light of Christ. He recounted how during the Battle of the Philippine Sea in 1944, 200 American pilots returning from battle with the Japanese fleet couldn’t find their own ships. The ship lights had been turned off to prevent the Japanese from discovering the Americans. A U.S. admiral had two choices: allow the returning Americans to run out of fuel and crash into the Pacific Ocean, or turn on the lights and risk enemy attack. He chose to send up flares, Archbishop O’Brien said, allowing all the planes to land safely.

“Jesus told us he is the light of the world,” said Archbishop O’Brien, noting that Christ calls everyone to “shine out your light for others.”

“He has come to show you the path,” Archbishop O’Brien said. “The Lord is your light and salvation, and never do you have to be afraid.”

The archbishop encouraged students to thank their parents for giving them a Catholic education. He also asked them to pray for religious vocations.

Erin Jones, a 10-year-old fifth-grader, joined her brother, Kevin, a 13-year-old eighth-grader, in playing Bach preludes and religious music on their violins as students entered the gymnasium for Mass. Wearing his miter and holding his crosier, Archbishop O’Brien paused to enjoy their musicianship before processing into the liturgy.

“It’s pretty cool to have him here,” said Erin, calling it an honor that the archbishop chose to visit her school.

Noah Ismael, a 10-year-old fourth-grader, said he was impressed by the archbishop’s message about appreciating others.

“I learned that it’s pretty good to be thankful for what you have,” he said.

A special collection was taken up during the Mass, with the proceeds to be used for purchasing pocket Bibles for members of the U.S. military services.