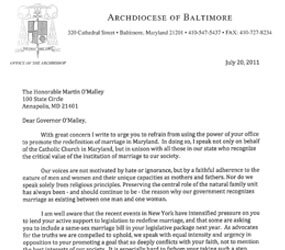 “I am well aware that the recent events in New York have intensified pressure on you to lend your active support to legislation to redefine marriage,” Archbishop O’Brien wrote, referring to New York Gov. Andrew Cuomo’s signing of gay marriage legislation in the Empire State.

“As advocates for the truths we are compelled to uphold,” Archbishop O’Brien said, “we speak with equal intensity and urgency in opposition to your promoting a goal that so deeply conflicts with your faith, not to mention the best interests of our society.”

Archbishop O’Brien said it was “especially hard to fathom your taking such a step, given the fact that our requests last year for you to sponsor legislation to repeal the death penalty and support students in Catholic and other nonpublic schools went unheeded.”

The archbishop was referring to a long-sought business tax credit that would benefit students and teachers in Catholic and nonpublic schools. O’Malley supports the credit, but did not take a leadership role in trying to pass it. The measure failed.

In an Aug. 4 response to Archbishop O’Brien, the governor cited a long list of items on which the two agree – including repealing the death penalty, reducing the incidence of infant mortality, “promoting the dignity of work and the justice of fair wages,” protecting the environment, feeding the hungry and healing the sick.

“I do not presume, nor would I ever presume as governor, to question or infringe upon your freedom to define, to preach about, and to administer the sacraments of the Roman Catholic Church,” O’Malley said. “But on the public issue of granting equal civil marital rights to same sex couples, you and I disagree.”

O’Malley said he was “sworn to uphold the law without partiality or prejudice.”

“When shortcomings in our laws bring about a result that is unjust,” he asserted, “I have a public obligation to try to change that injustice.”

Archbishop O’Brien noted that members of the Maryland General Assembly decided against legalizing same-sex marriage during the last legislative session even though they were subjected to “intense pressure, both from the public and from legislative leadership – despite leaders’ claims that this was a ‘vote of conscience.’”

“Admirably, many legislators, prompted by their deeply held moral convictions and those of the constituents they were elected to represent, courageously resisted the all-too-familiar pull of partisan allegiances and political ambition in making their decision to uphold marriage,” Archbishop O’Brien said. “Such courage is rare in politics and can best be rewarded if it serves as an example for others to emulate.”

The archbishop noted that “Maryland is not New York.”

“We urge you not to allow your role as the leader of our state to be used in allowing the debate surrounding the definition of marriage to be determined by mere political expediency,” Archbishop O’Brien said. “The people of Maryland deserve no less.”

Archbishop O’Brien said he welcomed the opportunity to speak personally with O’Malley on the issue of gay marriage.

Archbishop O’Brien’s letter to O’Malley was private and was released to the media by the governor’s office. The archbishop addressed the topic of same-sex marriage in his July 28 column in The Catholic Review.

To read the correspondence between Archbishop O’Brien and the governor, visit http://tinyurl.com/omob84.