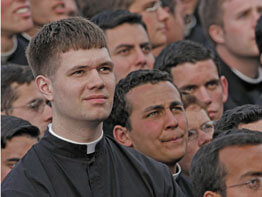 A Vatican apostolic visitation team has concluded that U.S. seminaries are experiencing a greater sense of stability since the 1990s, but recommended increased attention to the formation of priests and greater involvement of diocesan bishops.

In a report published in mid-January on the Web site of the U.S. Conference of Catholic Bishops, the Congregation for Catholic Education said American seminaries have done a better job addressing issues of morality among seminarians – specifically homosexual behavior.

The report called diocesan seminaries “healthy,” but raised concerns about some centers of formation run by religious orders “where ambiguity vis-à-vis homosexuality persists.”

Archbishop Edwin F. O’Brien, former rector of the Pontifical North American College in Rome and St. Joseph’s Seminary in Yonkers, N.Y., coordinated the visitation team. The apostolic visitation involved 120 bishops and seminary personnel. The visitation team interviewed every seminarian in the nation, according to Archbishop O’Brien.

“There was an almost unanimous sense of admiration and hope that the visitors found in the seminarians – for their integrity, their idealism, their love of the church and commitment to the church’s teachings,” Archbishop O’Brien said. “This may be an indication that the quality is rising and hopefully the numbers will follow.”

The visitation was prompted by the “horrid scandals” of the clergy sex abuse crisis, Archbishop O’Brien said.

“All the seminaries prepared well for the visitations and, paradoxically, I think the impact was felt before the visits took place,” he said. “Everyone knew what was going to be looked for and made sure attention was given to those areas that needed attention.”

The report said the apostolic visitors were “obliged to point out the difficulties, in the area of morality, that some seminaries had suffered in past decades.”

“Usually, but not exclusively, this meant homosexual behavior,” the report said. “Nevertheless, in almost all the institutes where such problems existed, at least in the diocesan seminaries, the appointment of better superiors (especially rectors) has ensured that such difficulties have been overcome.”

The report noted that when cases of immorality appear, “the superiors now deal with the issues promptly and appropriately.”

The report recommended that many seminaries revise their Rules of Life to make them more demanding.

“This will help the seminarians to take on a more priestly and ascetic character, and shed a worldly style of life,” the report said. “Issues to be included in the Rule include the appropriate use of alcohol, when the seminarians need permission in order to be absent from the seminary, the curfew (and) the areas of the seminary that are off-limits to guests.”

Sulpician Father Thomas Hurst, president-rector of St. Mary’s Seminary and University in Roland Park, noted that Sulpician Father Robert Leavitt, his predecessor, instituted some changes at St. Mary’s in anticipation of the visit.

“We’re monitoring more clearly our policies for admissions into seminary, and we’ve implemented celebration of the Eucharist for the entire community on Saturdays,” Father Hurst said. “We’ve always had devotions, but we’re increasing devotional life – particularly to the Virgin Mary, and we’re encouraging more frequent reception of the sacrament of penance.”

Father Hurst said he was pleased the report highlighted several areas where U.S. seminaries have made “great progress.” They include the “teaching and modeling by the faculty of the proper understanding of the priesthood and an emphasis on a strong rector with a united faculty and involved bishop,” he said. The report also encouraged seminaries to have clear admissions policies and emphasized prayer life and outreach to the newly ordained.

Monsignor Steven P. Rohlfs, rector of Mount St. Mary’s Seminary in Emmitsburg, said the Mount’s formation program is very much in keeping with the suggestions of the report. He noted that the report raises questions about whether there are too many seminaries for the number of men preparing for the priesthood. It asks U.S. bishops to study the issue.

The report asserts that most diocesan seminaries show a “remarkable amount of unity and harmony,” which was attributed to sound leadership.

“A lack of harmony, on the other hand, is almost always due to one or more educators being less than faithful to the magisterium of the church,” the report said. “In centers of priestly formation with an atmosphere of widespread dissent – which is the case particularly in centers run by religious – there can be no possibility of a unity of direction.”

The report encourages bishops to take an active role in the accepting of priest candidates. The visitation team found bishops and major superiors to be “almost universally” interested in and supportive of their seminaries. The report also said seminaries generally perform adequately in shaping men to live celibate lives.

The apostolic visitations occurred in 2005 and 2006. The report was signed by Cardinal Zenon Grocholewski, head of the Congregation for Catholic Education.

The apostolic visitation report is available in its entirety at www.usccb.org/cclv/final_report.pdf.