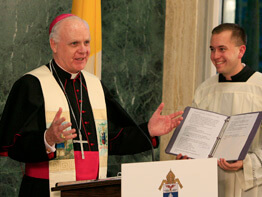 WASHINGTON – In one of his last acts as head of the U.S. military archdiocese, Archbishop Edwin F. O’Brien dedicated a building he hopes will be “a lasting monument” to the service and sacrifices of American military personnel and the chaplains who minister to them.

Archbishop O’Brien, who was to be installed Oct. 1 as archbishop of Baltimore, blessed and dedicated the new headquarters of the U.S. Archdiocese for the Military Services in the northeast section of Washington Sept. 26.

The archdiocese coordinates the spiritual care of nearly 1.5 million Catholics around the world, including active-duty and reserve military personnel and National Guard members, their families, U.S. government workers overseas and residents of Veterans Affairs hospitals.

“They sacrifice so much of themselves for this nation” in order to “bring peace and justice to troubled lands,” the archbishop said of the military.

In a brief interview before the dedication, Archbishop O’Brien said he hoped the new headquarters would “put us on the map in a way we have not been before” and would “serve as a constant reminder of the spiritual needs of the military and their sacrifices.”

Among the guests at the dedication were Cardinal William W. Baum, a former Vatican official and former archbishop of Washington; Archbishop Pietro Sambi, apostolic nuncio to the United States; Archbishop Donald W. Wuerl of Washington; and Jim Nicholson, the former U.S. ambassador to the Vatican who was to step down Oct. 1 as U.S. secretary for veterans affairs.

Mr. Nicholson said he had known Archbishop O’Brien “since he was a pup priest” when both were working at the U.S. Military Academy in West Point, N.Y., in the mid-1960s.

Praising the work of military chaplains to “heal broken bodies and bolster broken spirits,” he said the “many values of a positive religious experience are well known to us medically.”

Archbishop Wuerl said the new building will serve as a concrete reminder that the need for Catholic chaplains to serve the U.S. military personnel around the world “far exceeds” the number of priests available to do so.

He said a Catholic serviceman heading to Afghanistan had told him that the most important thing he needed was to “always be in the presence of the church.”

The headquarters of the military archdiocese “is a reminder to us (bishops) of our part in supplying priests for this tremendous ministry,” Archbishop Wuerl said.

During a post-dedication reception, guests also had an opportunity to venerate relics of St. Anthony of Padua, patron saint of sailors; St. Therese of Lisieux, patron of pilots and air crews; and St. Ignatius of Loyola, patron of soldiers.

Among the other guests at the dedication were Carl Anderson, supreme knight of the Knights of Columbus, and Patricia and Christopher Haig, the wife and grandson of Gen. Alexander Haig Jr., former U.S. secretary of state and White House chief of staff.

The refectory, or dining room, in the new headquarters is named for Haig.

The 40,000-square-foot building, which Archbishop O’Brien said was in the planning stages for more than three years, also includes public and private chapels, living quarters, a small underground garage and more than 20 offices for the staff of 30.

Auxiliary Bishop Richard B. Higgins will administer the Archdiocese for the Military Services until a successor to Archbishop O’Brien is named. Bishop Higgins and Auxiliary Bishop Joseph A. Estabrook were ordained bishops at the same 2004 ceremony, but church law calls for the senior bishop by age to become apostolic administrator.