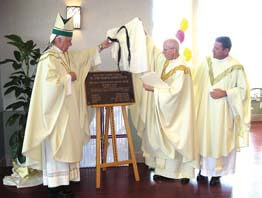 Wielding a pair of oversized scissors, a smiling Archbishop Edwin F. O’Brien snipped a golden dedication ribbon with one decisive cut Oct. 7 – officially dedicating a brand-new $3.6 million parish center at Holy Family Catholic Community in Middletown and marking the first of what is likely to be many dedication ceremonies as Baltimore’s 15th archbishop.

Named in honor of Holy Family’s founding pastor who served the Frederick County faith community for more than 18 years, the Father John Charles Moore Center features an expanded narthex in front of the church, a nursery, a social hall, a commercial kitchen, meeting rooms and storage space.

Father J. Kevin Farmer, Holy Family’s current pastor, said the center provides 20,000 square feet of much-needed space for a steadily-growing parish that now has about 830 registered families – up from 500 registered families when he was appointed pastor three years ago.

“Most of our people are geographically oriented to Washington, D.C.,” said Father Farmer, noting that many of his parishioners are Washington transplants who still work in the capital but live in Frederick County. “We have a lot of government workers.”

The hall, which can seat about 200 people, is an especially-welcome addition because it provides an on-campus site for social functions like dances, Father Farmer said.

“People are glad to be able to stay after Mass and build community in a much bigger way than we could before,” the pastor said. “There’s a great deal of excitement.”

The hall will also be used for overflow space at large liturgies at Christmas and Easter, Father Farmer said.

Gordon Schultze, an 87-year-old who was the oldest parishioner able to attend the dedication celebration, held one end of the dedication ribbon as the youngest members of the parish held the other.

“The people have responded wonderfully to our fundraising campaigns for this project,” said Mr. Schultze, who served on the building committee. “We’re shy only $250,000.”

Father Farmer said there have been three capital campaigns and another will be launched in the future.

In his homily, Archbishop O’Brien praised Father Moore and Father Farmer for their leadership in making the parish center a reality.

“They had a vision and they persevered,” he said.

Father Moore said it was a privilege to serve as Holy Family’s founding pastor. He recalled with a smile that when Bishop P. Francis Murphy, the late western vicar, asked him to come to Middletown to establish the parish, his first response was, “Where’s Middletown?”

“I loved what I did and I loved the people there,” said Father Moore, noting that he worked hard to build a sense of collegiality in the parish. “I tried to listen every day to God speaking through human words.”

Kristin Schellinger, an 18-year-old parishioner who was presented with the Eagle of the Cross Award by Archbishop O’Brien for her service in the community, said the new parish center “means a lot” to her parish. It’s a sign of the community’s vibrancy, she said.

The parish center was designed by Noelker and Hull Associates, Inc. and built by Bruchey Builders, Inc.