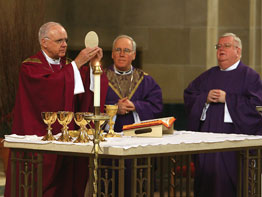 Calling it the “main preoccupation” of the seminary to “create priests after the heart of Christ,” Archbishop Edwin F. O’Brien celebrated Mass with the board of trustees, seminarians, administrators and members of the St. Mary’s Seminary community in Roland Park, March 3.

The archbishop held up the example of the royal official in the Gospel of John who sought Jesus and asked for a cure for his son. Christ told the man to return home, and on the journey the son was cured.

“What confidence in Christ he showed as he turned on his heels and headed back,” said Archbishop O’Brien. Believers today must show that same kind of confident faith, the archbishop said. They must not be like the Pharisees who witnessed what Jesus did but did not know who Jesus was, he said.

“We think we know Christ – but how deeply?” Archbishop O’Brien said. “We think we want to do his will, but how full are our prayers of ourselves and our will?”

The liturgy was preceded by a meeting of the board of trustees. Archbishop O’Brien is the board chair and chancellor of the seminary.

“It’s a very active board,” Archbishop O’Brien told The Catholic Review. “The interest they take, the knowledge they have, and their sense of history is very impressive.”

The archbishop said he was pleased that board members ask questions that “get to the core of priestly formation.”

“So often boards are just fixtures and decorations,” he said. “This is an active and effective board.”