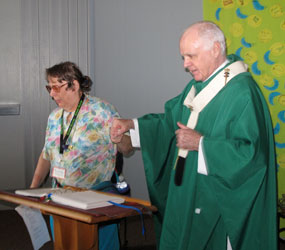 SPARKS – Mary Ann Basta brought the gifts of Mass to Archbishop Edwin F. O’Brien July 12, then looked to a friend.

“I like that guy (the archbishop),” the 53-year-old attendee of Camp GLOW said with a smile. She was inside the Monsignor O’Dwyer Retreat House chapel, surrounded by friends who were also celebrating their annual Mass with the archbishop.

“I look forward to this every year,” the archbishop said enthusiastically as Mass began.

Camp GLOW (God Loves Our World) is a series of three week-long residential camps for adults with special needs who are from the archdiocese. Begun in 1979, the camp allows persons with disabilities to flourish spiritually and socially, with activities such as swimming, hiking, arts and crafts, song and a talent show.

Camp GLOW is part of the Archdiocese of Baltimore’s growing outreach to people with special needs. Bill Fleming, the archdiocese’s director of disabilities ministry and of Camp GLOW, states that the ministry’s expansion is important.

“Statistically, 20 percent of any given population is deemed to be disabled,” he said.

Fleming is a member of a new disabilities ministry council for the archdiocese. Its vision statement says that Catholics with disabilities should participate in every aspect of parish and community life, something seen at Mass with the archbishop.

In addition to Basta being among those who carried the gifts during offertory, two campers read the first reading and the Psalm.

During his homily, the archbishop cited the camp theme, “Thank You, Lord!” He spoke of how Christ offered up thanks to God for his followers at the Last Supper. The archbishop said that the campers, as Christ’s followers, are part of that “thank you.”

“You are Christ’s special gift to his father,” the archbishop told campers.

After Mass, Archbishop O’Brien personally thanked all “companions”– the assisting volunteers at the camp – saying that he valued their dedication. Like Archbishop O’Brien, many volunteers return every year. When he asked if there were any first-time companions, only one of the 12 raised a hand.

Laura Platania, a parishioner of St. Bernadette in Severn, has been working at Camp GLOW for the past four years.

“Being a companion is one of the most enjoyable experiences,” Platania said. “It might be intimidating and you might not know what to expect, but it all comes in time.”

Platania, a representative on the new disabilities ministry council, expressed her excitement about broadening outreach for the disabled.

“They’re brilliant in their own ways,” Platania said, “they are all so capable. They have so many talents. They love God, they love church and they pray more than an average Catholic does.”

The new council seeks not only to serve people with special needs, but enable them to serve in return.

“Everyone deserves that chance to serve,” Platania said.

Fleming said the archdiocese has given both the council and Camp GLOW overwhelming support. Part of the Archbishop’s Annual Appeal helps support Camp GLOW. Various parish ministries, such as Knights of Columbus councils and youth groups, dedicate time to the camp.

Fleming expressed appreciation, especially for the priests who come to celebrate Mass. Each daily Mass at Camp Glow has a different celebrant.

“The priests have been great,” Fleming said, smiling. “That’s 15 different priests, coming here to serve. … It’s important to step back and see that this is what the church is – we’re caring for the disabled.”