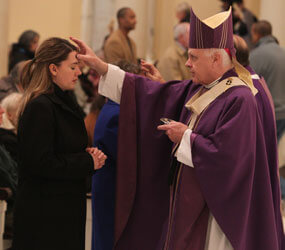 During a March 9 Ash Wednesday liturgy at the Basilica of the National Shrine of the Assumption of the Blessed Virgin Mary in Baltimore, Archbishop Edwin F. O’Brien called on Catholics to affirm traditional marriage by participating in a special day of prayer and fasting March 18.

The Maryland House of Delegates is preparing to vote on a bill that would make Maryland only the sixth state in the nation to legalize same-sex marriage.

“The institution of marriage can only belong to the union of one man and one woman because nature – not social prejudice – has given this relationship the unique capacity to bring children into the world,” Archbishop O’Brien said in a written statement. “It is for this reason that religion and governments alike have bestowed special recognition upon this relationship for thousands of years.

Archbishop O’Brien said the value of marriage “must not be abandoned for the sake of partisan politics or political gain.”

“It is not too late for the members of the House of Delegates to hear from God’s people and to vote in accordance with their true conscience to uphold marriage,” Archbishop O’Brien said

Ash Wednesday marks the beginning of Lent, the 40-day period when the Catholic Church asks the faithful to give themselves to prayer and to the reading of the Scripture, to fasting and to giving alms, in an effort to sharpen their senses and focus mind and heart on the reign of God.

The rules for fasting and abstinence are posted at https://www.archbalt.org/our-faith/catholic-resources/fast-abstinence.cfm.