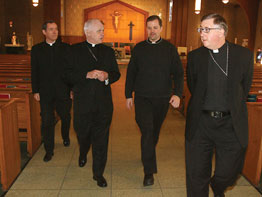 The response from parishioners and parish staff was positive as the archbishop toured church properties.

“The priesthood is people; you’re rooted in Christ and you find Christ in these parishes and in these schools and certainly in the priests who are hardworking and committed,” Archbishop O’Brien told The Catholic Review. “It just gives me a great lift and it’s inspirational – you don’t get that at a desk. You get it in the midst of the people; that’s where the priesthood is, and that’s certainly where the bishop has to be.”

The tour began with an 8 a.m. Mass and a quick continental breakfast at St. John the Evangelist, Hydes, where Father William F. Franken serves as pastor.

A student from St. John the Evangelist School asked Archbishop O’Brien if he had ever seen Christ. Baltimore’s new archbishop responded that he sees Christ in everyone there and in the poor.

“He was just superb in giving them a message about seeing Christ in the poor and in each other,” said Father Franken.

Father Franken also praised the archbishop for reassuring one little boy who, after raising his hand, froze when the archbishop called on him. Archbishop O’Brien told him not to worry, that he knew there was a good idea in there somewhere and we’d hear it one day. “He made his day,” Father Franken said.

The archbishop also urged children to pray for more priests and asked them to consider becoming priests, brothers and sisters.

Since taking on his role as leader of the archdiocese Oct. 1, Archbishop O’Brien has visited more than 70 of the archdiocese’s 151 parishes. The eastern vicariate includes Baltimore, Harford and Anne Arundel counties, and the parishes range from rural churches flanked by cornfields to those just over the city line.

“He seems like such a jolly person in all his pictures,” said Norma Miller.

When he arrived and saw the small crowd, Archbishop O’Brien joked, “We’re here for bingo.”

“We were very pleased – everyone was excited, including me,” said Father Edward B. Hemler, pastor of the Fallston church.

The parishioners were moved when the archbishop knelt before the altar to say a prayer.
Although the visits were brief, the archbishop peppered pastors with questions, including how they perform baptisms and how many children are enrolled in religious education classes. He also asked about the origins of a chapel’s statues.

Upon leaving St. Margaret, Bel Air, one of the largest parishes in the archdiocese, the archbishop looked around and asked about parking.