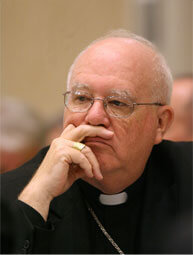 SAN FRANCISCO – Using the “high level of political consciousness and energy” in the Archdiocese of San Francisco as a kind of backdrop, Archbishop George H. Niederauer issued a pastoral letter on the role of the church in the political arena.

Titled “Religion and Politics 2008,” the document addresses a series of issues including the role and meaning of conscience, the place of abortion and euthanasia in church political involvement and the process of discerning how to vote in situations where candidates clearly hold positions directly opposed to church teaching.

The archbishop said he wanted to released the commentary now “before candidates have been nominated and party platforms completed so that we can look at these questions for their own value, and not misinterpret them as veiled endorsements or condemnations.”

The text quotes frequently from “Faithful Citizenship,” a document revised and issued by the U.S. bishops’ conference during U.S. presidential election cycles.

The statement for the 2008 elections is titled “Forming Consciences for Faithful Citizenship: A Call to Political Responsibility From the Catholic Bishops of the United States.” The bishops approved it Nov. 14. They also endorsed a shorter document, designed as a parish-bulletin insert.

Archbishop Niederauer urged Catholics to read the bishops’ statement and stressed that “it is not a voter’s guide, nor does it endorse particular candidates or parties.”

Using a question-and-answer format for his pastoral, Archbishop Niederauer addressed whether or not churches should even be involved in politics. While church and state “should be independent of each other,” he wrote, “both politicians and religious leaders rightly – and unavoidably – concern themselves with many of the same issues.”

Ethicists and moral teachers address the principles of right and wrong in human behavior, and those principles guide both believers and citizens.”

He cited civil rights and care for the poor and the homeless as common concerns for both church and state.

“A recent Vatican document makes the point that the political sphere has a ‘rightful autonomy … from that of religion and the church – but not from that of morality,’“ he stated.

Regarding the individual Catholic’s role in the political arena, the archbishop underscored that the church “teaches that all citizens should take an active part in public life.”

“Shrugging cynically and strolling away from any involvement is not a proper response for a follower of Jesus Christ,” he wrote. “Ideally, of course, individual members of a party or movement should transform it by a thoughtful application of moral principles, rather than being transformed by it.”

The archbishop, who heads the U.S. bishops’ communications committee, said, “Education, public safety and law enforcement, health care, and so many essential matters depend for their quality on the direct participation of citizens in the political process.”

On the question of whether a Catholic can in good conscience vote for a candidate “who takes a position directly opposed to Catholic moral teaching,” Archbishop Niederauer turned to “Faithful Citizenship.”

He quoted from a section that states: “There may be times when a Catholic who rejects a candidate’s unacceptable position may decide to vote for that candidate for other morally grave reasons. Voting in this way would be permissible only for truly grave moral reasons, not to advance narrow interests, or partisan preferences or to ignore a fundamental moral evil.

“When all candidates hold a position in favor of an intrinsic evil, the conscientious voter faces a dilemma,” the document said. “The voter may decide to take the extraordinary step of not voting for any candidate, or after careful deliberation, may decide to vote for the candidate deemed less likely to advance such a morally flawed position and more likely to pursue other authentic human goods.”

Catholics should take with a grain of salt criticism from those who claim the church is bent on “trying to impose its doctrine on the entire community,” the archbishop wrote.

“In this country we can all name newspapers that applaud bishops who oppose the death penalty as courageous moral leaders, and condemn as intrusive dogmatists those same spokesmen when they oppose physician-assisted suicide,” he said.

“Actually, Catholic social teaching does not fit easily into ideologies of ‘right’ and ‘left,’ or the platform of any one political party,” he added. “We do not trim our teaching of fundamental moral principles to fit the demands of our critics, so they in turn blow hot and cold toward us.”

The archbishop stressed that abortion and euthanasia must take a higher priority in decision-making than many other issues.

“For example,” he said, “a politician might say in effect to Catholic voters, ‘Well, I’m with you on raising the minimum wage, so can’t you cut me some slack on abortion and physician-assisted suicide?’“

At the same time, he said, it is incorrect to reduce “Catholic moral and social teaching to one or two issues, and refusing to be concerned about a wide range of issues.”

The text of the U.S. bishops’ “Faithful Citizenship” document can be found online at www.usccb.org/bishops/FCStatement.pdf.