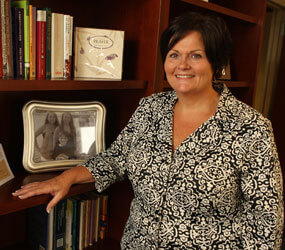 The Archdiocese of Baltimore did not have to look far for its next superintendent of Catholic schools.

Dr. Barbara Edmondson, who has held that position on an interim basis since July 2010, has assumed the post permanently. Archbishop Edwin F. O’Brien named Edmondson Feb. 22.
Monsignor Richard Woy, vicar general for the archdiocese, made the announcement, before principals and assistant principals gathered in Timonium for the launch of a new leadership institute for administrators.

“I’m excited about the teamwork we have in place,” Edmondson said. “The permanent appointment is an opportunity to continue to advance some of the initiatives we’re working on.”

Edmondson became interim superintendent during a challenging time for Catholic schools in the archdiocese. Four months prior to her filling the position, the archdiocese announced the closing of 13 schools.

That reorganization was followed by the June 2010 unveiling of the Blue Ribbon Committee on Catholic Schools’ strategic plan. Edmondson is working with the first Archdiocesan School Board during its implementation, designed to bolster the education of more than 29,000 students in the system.

During an important time of transition, she will draw on the experience she gained in her previous job.

Edmondson came to the Catholic Center after a highly successful decade as the first principal of School of the Incarnation in Gambrills. Serving multiple parishes in Anne Arundel County, it opened with 80 students but now enrolls more than 800.

“When you open a school, everything is new, everything is a first,” Edmondson said. “We had to keep everyone informed, about new programs, new teachers. As we advance the strategic plan, when I think about what we did for 10 years at School of the Incarnation, there is a benefit there.”

The strategic plan includes 56 recommendations, many focusing on Catholic identity, academic excellence, governance and stewardship. One recommendation led to the creation of a Principals Leadership Institute for Advanced Study, which opened Feb. 22 at Loyola University Maryland’s Graduate Center in Timonium.

According to a news release, the certificate program was developed by Edmondson and Associate Superintendent Margaret Dammeyer, in collaboration with the College of Notre Dame of Maryland, Loyola University and Mount St. Mary’s University.

Edmondson voiced gratitude, for the dedication of her department and other offices at the Catholic Center, and to Archbishop O’Brien.

“I was so delighted to see how the archbishop is committed to Catholic schools,” Edmondson said. “Everyone rallies around them.”

In a news release, the archbishop said that Edmondson “has done a remarkable job of building a talented and dynamic team. … Her performance over the last several months as well as her accomplishments in building one of our most successful schools made her a clear choice to lead our school system.”

Her appointment comes after a yearlong national search for a successor to Dr. Ronald J. Valenti, who retired in November 2009. The search committee was headed by Dr. Mary Pat Seurkamp, president of the College of Notre Dame of Maryland.

Edmondson received a bachelor’s and a master’s degree in educational psychology from Montclair State College in New Jersey. She received a doctor of education degree in 1998 from George Washington University in Washington, D.C.

She taught at the elementary level in the Diocese of Metuchen, N.J., and the Archdiocese of Washington. She was principal of St. Ambrose School in Prince George’s County from 1995 until 2000, when she opened School of the Incarnation.

Her background includes 10 years as an adjunct professor at George Washington University.

A parishioner of Holy Family in Davidsonville, she is the mother of four students in the system. Two attend School of the Incarnation, and two attend St. Mary’s High School in Annapolis.

What is the biggest challenge she sees for her office?

“The big challenge for all Catholic schools, not just in the Archdiocese of Baltimore but across the nation, is finding the resources,” Edmondson said. “To make our schools strong in every way, we need the resources.”