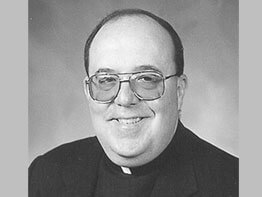 In an Oct. 29 statement, Archbishop O’Brien announced that the pastor of St. John the Evangelist in Severna Park would begin his new position as vicar general and moderator of the curia for the Archdiocese of Baltimore Nov. 3. He will act as chief operating officer at the Catholic Center, assisting the archbishop and Auxiliary Bishops Denis J. Madden and Mitchell T. Rozanski.

Monsignor Woy, 55, previously served as chancellor, director of the office of child and youth protection, executive director of management service and director of clergy personnel.

Not wanting to take a priest out of parish ministry, Archbishop O’Brien said he considered hiring a lay person.

“I ultimately decided that Monsignor Woy’s unique talents and experience as pastor and as a former member of our archdiocesan staff were valuable attributes that will enable us to address critical and immediate needs,” Archbishop O’Brien said.

Earlier this year, the archbishop appointed Monsignor Woy chair of the board of directors for the Cathedral Foundation, parent company of The Catholic Review. He also serves on several high-ranking archdiocesan advisory boards and as the archbishop’s delegate for the Independent Review Board.

In an interview with The Catholic Review, Monsignor Woy said he believed his institutional knowledge will be an asset to the archbishop – especially in the absence of Bishop W. Francis Malooly, the current bishop of Wilmington, Del., who was the previous vicar general and moderator of the curia.

“I think my familiarity with the culture of the Catholic Center and the diocese will allow me to hit the ground with both feet running,” said Monsignor Woy, who grew up in the Westernport parish of St. Peter.

With the country facing an economic downturn, Monsignor Woy said one of his top priorities will be working with archdiocesan leaders to use archdiocesan resources “prudently.”

Monsignor Robert Jaskot will serve as temporary administrator of St. John effective Dec. 1 while continuing as director of the Office for Worship at the Catholic Center.

Ordained in 1979, Monsignor Woy served as associate pastor of St. Philip Neri in Linthicum and St. Joseph in Fullerton. He was named pastor of St. John in 2005.

“I’m going to miss the people of St. John’s,” said Monsignor Woy, noting that he’s looking forward to the challenge of his new post. “It’s a marvelous parish.”