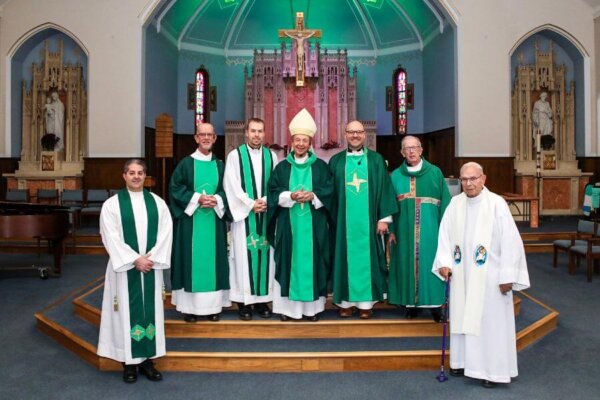 Last summer, while on vacation, I stopped in to see Tom and Maribel Erickson here in Midland. As many of you know, Tom is the nephew of the late James Cardinal Hickey, formerly the Archbishop of Washington and a native son of St. Brigid Parish.

Over a plate of delicious carbonara, – it was Cardinal Hickey’s recipe – all three of us recalled the fact that today, Oct. 11, would mark the 100th anniversary of the birth of Cardinal Hickey. So the idea was hatched that yours truly would return to Midland to offer a Mass here at St. Brigid’s, in remembrance of His Eminence. So, here I am.

By and by, I also learned that you are celebrating the 150th anniversary of St. Brigid’s. Surely, June 15, 1946 was one of the happiest days in the life of this parish, the day when Bishop William Murphy of Saginaw ordained James Hickey a priest.

The next day, young Father Hickey, the son of Dr. James and Agnes Hickey, celebrated his first Mass, here in this parish church. That evening, he celebrated something called “Seven Cope Vespers” – a complicated form of evening Prayer that has probably not occurred here since then.

By the time I met Cardinal Hickey in 1980, he had been a priest 34 years and a bishop for more than a dozen years. He had earned two doctorates in Rome (moral theology and canon law), served as Rector of the Pontifical North American College in Rome, and had been the Bishop of Cleveland for six years.

In 1982, after I finished my post-ordination studies, then Archbishop Hickey asked me to serve as his priest secretary. At the time, I had no idea what a busy and challenging place his office was. I felt like an outfielder with fly balls whizzing past my head all day. Finally, one day I told him I didn’t think I was up to the job. He told me I wasn’t all that bad, asked me to stay on a while longer, and urged me to display my sense of humor, and, in general, to loosen up.

In that moment, I began to discover the humanity of the priest and bishop who became my mentor and friend, and under whom I served for nearly two decades.

I came here today to pay heartfelt tribute to the late Cardinal and to thank the parish and the family that gave the Church such a magnificent leader and servant.

Through the Lens of Scripture

Every morning, the Cardinal made a Holy Hour during which he pondered the Scriptures. If he could do so today, he would restrain me from saying anything about himself – but if something had to be said, he would want it to be situated in Holy Scripture.

Immediately upon reading today’s Scriptures, many memories of the Cardinal flooded my mind and heart; I’ll share only a few.

First, when I read Isaiah’s description of the wonderful feast that the people of Israel would experience on God’s holy mountain, I did think of the one thing the Cardinal really loved to prepare – carbonara – but that was not the feast which he served throughout his service as priest and bishop.

The feast that Cardinal Hickey served, day in and day out, was the truth and love of our wonderful Catholic faith. When asked how he wanted to be remembered, he spontaneously responded first, that he was loyal to the Church, second, that he was a friend of Catholic education, and third, that he loved the poor . . . and all three were a very real part of who he was.

His motto was “veritatem in caritate” which means, ‘doing the truth in love,’ and that is precisely how he lived: he lived the truth of the faith with great love.

The Cardinal could speak eloquently about the faith in Latin, Greek, Spanish, Italian, and, of course, English,           but he mostly taught the faith by the priestly example which he set.

The many bishops and priests who had been his seminarians will, to this day, proudly tell you that they were formed for the priesthood by Cardinal Hickey. I was not the Cardinal’s seminarian but, as a priest, I got the 18-year tutorial, a gift for which I shall always be grateful to the dear Lord.

Second, I saw a reflection of the Cardinal’s life in today’s Gospel, a parable which Jesus told about a king who had prepared a feast that was spurned by the invited guests. So, he filled the banquet hall with the poor and marginalized who were gathered in from the highways and byways.  That is exactly what Cardinal Hickey did as a priest and bishop. He invited the poor and marginalized to be a part of the Church’s life.

During his first winter in Washington, an exceptionally cold winter, the Cardinal noticed that many homeless people were on the streets. He asked his pastors, especially those in the city, to open their churches so that the poor would have a warm and safe place in subzero temperatures. Later, he oversaw the expansion of Catholic Charities’ services for the homeless. With St. Mother Teresa, he opened a hospice for the poor suffering with HIV/AIDS, even though there was a lot opposition from the neighborhood and city government. What’s more, His Eminence did not merely oppose abortion – though he did so vigorously – but also helped women in difficult pregnancies to bring their babies to term, and to care for them once they came into the world.

These were the people the Cardinal invited to the banquet of life and love and these were people whom he served with loving devotion.

Third, toward the end of today’s Gospel, there is the passage about the man who came to the banquet hall without a wedding garment. Presumably, he was clad in dirty, tattered clothing – the point being, that to partake of the heavenly wedding feast, we must be clothed, not in our sins, but with the deeds of virtue and love.

I always thought that Cardinal Hickey cut a fine figure in his cardinal’s robes, but those were not the robes he was wearing when, after death, he approached the gates of heaven. I am confident he was clad in the raiment of his kind and thoughtful deeds. How often he went to see priests and others in the hospital, or called up someone who was having a hard time, or simply thought about the feelings of others when no one else did.

Then, we have St. Paul in his letter to the Philippians telling us how he (Paul) managed to keep his chin up through thick and thin, even as he thanked the community at Philippi for their generosity towards him. Here I would like to say that, over two decades, I saw Cardinal Hickey in all kinds of situations … days of joy and accomplishment and days of sorrow and frustration.

When he dealt with a major challenge or a problem, the Cardinal always prayed about it, asked others to pray for him, but then he systematically put his mind to it, found the help he needed, and, with patience and determination, wrestled it to the ground.

When he made a mistake, as do we all, he was the first to admit it, and he never let a day end on an angry note. I saw that again and again.

The Cardinal experienced more than his share of anxiety and heartache, but through it all, he was never bitter or cynical, and was never anything less than the gentleman James and Agnes Hickey taught him to be. Indeed, one of the Cardinal’s greatest attributes is that he was the same person in private as he was in public. He never put on a show. He was authentic.

And let me add this – he was a person of strong convictions and drive – but it was never about himself or his ambitions – always about the Church and others.

To this day, when facing some problem, I am reminded of things he said and did that I had long since forgotten. So, I guess my old friend is still nudging me along.

The Cardinal had a wonderful family – how blessed I was to come to know them – & life-long priest friends, like Father Harry Hart, Monsignor Olin Murdick and Monsignor Arsulowicz, and, of course, his third grade teacher here at St. Brigid’s, Sister Mary Ignatius, R.S.M.

Before he went home to the Lord, the Cardinal warned me not to canonize him, and, if he is listening in today, he probably thinks I came awfully close to doing just that. So, as in the midst of St. Brigid’s sesquicentennial, we lovingly remember the centenary of Cardinal Hickey’s birth, let us give thanks to God for his life and ministry in our midst, and let us also ask the Lord to grant him the joy of life eternal.

May his great priestly soul rest in peace. Amen!