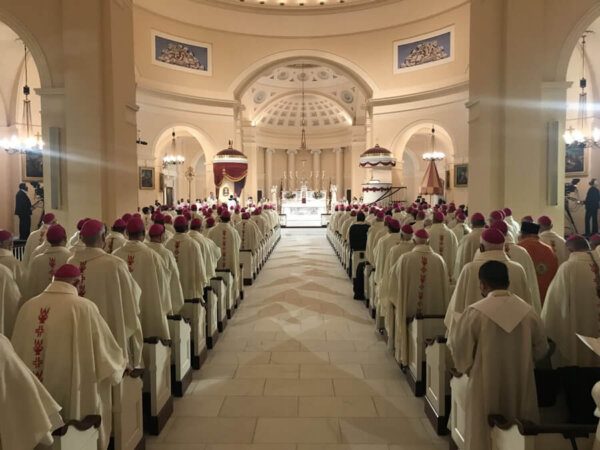 As the Archbishop of Baltimore, I am delighted to welcome you home to this historic church, America’s first cathedral, the Basilica of the National Shrine of the Assumption of the BVM, and to do so on the occasion of the 200th anniversary of its dedication by Archbishop Ambrose Maréchal, the third archbishop of Baltimore. Not only does this church reflect the genius of architect Benjamin Henry Latrobe, it remains after more than two centuries a parish vibrant in faith, worship, and service, and for us and for our nation, it stands as the home of American synodality.

A plaque in this basilica commemorates the seven Provincial Councils of Baltimore that were held here from 1829-1849, as well as the three Plenary Councils held in 1852, 1866 and 1884, synods that led to the yearly meetings of the nation’s archbishops, and later, in 1917, to the creation of the episcopal conference gathered here tonight. Lithographs and photos from those times depict scenes of a cathedral filled with bishops, religious superiors, priests, and theologians as well as members of the lay faithful, gathered in solemn worship. While those synods were not as inclusive as the synodal path pointed out by Pope Francis, they were nonetheless indicative of a desire on the part of the bishops to meet, to pray, to talk things out, and where possible, to reach consensus, and to do so for the good of a growing church in a restless and divided nation. It seems appropriate then that we celebrate a tradition of synodality, in these days when the “Synod on Synodality” is underway throughout the Church.

Looking back at the councils held in this basilica, we realize that they took place in times very different from our own. Yet, our predecessor-bishops dealt with problems not unlike the ones we grapple with: the challenge of immigration, liturgical and catechetical matters, the rights of workers, the need for Catholic education, relations between bishops and priests, and more broadly, the relationship of faith and culture in America. As all of us recall, those meetings were not always harmonious. There were sharp differences of opinion, let us say, between Bernard McQuaid of Rochester and John Ireland of St. Paul and Minneapolis. Lo and behold, those differences did not go unnoticed by the secular and religious press of the day nor by the Holy See. More than once the Holy See interceded in the affairs of American bishops. We think of Leo XIII’s encyclical Longinqua oceani of 1895 and his 1899 apostolic letter addressed to Cardinal Gibbons, Testem Benevolentiae, the latter dealing most directly with Americanism or “Heckerism” as it was called. Yet, in spite of the divisions that ran through the American hierarchy of that day, they managed to preserve robustly an essential unity of faith, and they proclaimed and taught the faith boldly and persistently. And, as the Church in America came of age, they kept the conversation going, due in no small part to the masterly leadership of James Cardinal Gibbons. We might also ask ourselves what our 19th-century predecessors declined or failed to discuss, or did not grapple with adequately in their meetings. A glaring example is slavery about which the 1852 First Plenary Council remained silent. Such silence may have preserved a degree of unity among bishops hailing from the North and the South, but in hindsight, failure to condemn slavery stands as a blot on American conciliarism. Similarly, the bishops gathered for the Second Plenary Council did not fully grasp the immense pastoral need and opportunity presented by 4 million emancipated slaves.

Application for Our Day and Age

I review what all of us learned in American Church history class, not just for the sake of history, but because I think it has broad application to us gathered tonight in this Basilica. What can we learn from our predecessors about being a synodal Church today? Allow me to offer one or two suggestions to spur your own thought and reflection.

First, the conciliar path is paved with prayer. The opening and closing liturgies of 19th-century councils were more than a spectacle. Rather, our predecessors recognized, as we do tonight, our complete dependence on the eucharistic Lord, our need to open ourselves to the Holy Spirit, and to listen attentively to the Word. This is how we grow in our capacity to listen to one another and our people as we journey together. In tonight’s Gospel, the Apostles returned to Jesus after having been on mission. They were eager to tell him how it went and he listened to them lovingly and attentively. How good that we began our Plenary Assembly with prayer and reflection, and that we imbue it with Holy Mass, Eucharistic Adoration, and the Liturgy of the Hours. Only when we are with Jesus in prayer can we journey with one another. Without prayer, we risk deepening divisions and thwarting God’s will.

Second, the way forward for the synodal path is rooted in the received faith of the Church. The Book of Deuteronomy teaches us that God’s truth is not inaccessible – ‘up in the sky or across the sea but rather in our hearts and on our lips.’ It is the faith we profess and proclaim. We therefore gather as those deeply rooted in “one Lord, one faith, one Baptism,” that faith of which God’s people has a supernatural sense. We are rooted in something much bigger and more beautiful than ourselves, and before this faith and its author Jesus Christ, we stand together in amazement. As we do so, the Spirit speaks to our hearts, individually and collectively.

Earlier, I mentioned that our predecessors maintained a kind of unity by avoiding the divisive issue of slavery, and then missed the opportunity to serve the pastoral and material needs of the emancipated slaves. This reminds us that the synodal path is not the path of least resistance, nor is synodal unity based on the avoidance of sensitive or painful problems. Rather, we must seek to know and do the truth in love. As we sift through the abundant materials that we receive prior to our meetings, you and I must humbly ask ourselves and others the question, whom we might be leaving behind in our deliberations. Have we overlooked the most vulnerable and defenseless among us? What pastoral problem, need or opportunity have we tabled, perhaps indefinitely?

Finally, in the days ahead we have the opportunity to model synodality. To be sure, a meeting as complex as ours needs to follow parliamentary procedures. Yet, as we tackle challenging issues and make our interventions, we can be and we should be and are model the synodal virtues outlined tonight by St. Paul. To journey together, we must help one another along the way; console one another; and listen together to the wisdom and love of the Holy Spirit. Paul calls us to compassion and mercy, while urging us to be ‘of the same mind, with the same love, united in heart, thinking one thing. …” And, he calls you and me to selflessness, humility, regarding the other as more important than themselves. By manifesting such virtues and attitudes, our proceedings, our gatherings, our deliberations, overcome the din of noisy ideologies of right and left, overwhelming them, not by the volume of our voices, but by our love for the Lord, for his Church, for his People, and for one another.

Welcome home, dear brothers, and may the eucharistic Lord continue to bless our meeting and keep us always in his love!