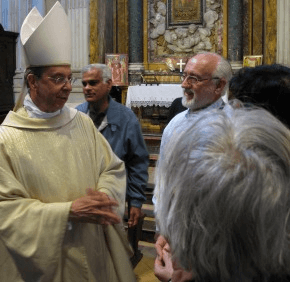 By Paul McMullen
pmcmullen@CatholicReview.org
@ReviewMcMullen
ROME – The chapels of the Eternal City resemble the runways at BWI on a Friday afternoon.
With hundreds of thousands of pilgrims already in town for the April 27 canonizations of Blessed John XXIII and Blessed John Paul II, priests from around the globe knew that reserving a chapel to celebrate Mass with their faithful well in advance was just as vital as booking a hotel room.
While St. Peter’s Basilica can accommodate 30 Masses simultaneously, things were a little quieter the morning of April 25 at Santa Maria in Trastevere (St. Mary’s Across the Tiber), where Archbishop William E. Lori visited with pilgrims from Baltimore as they waited their turn in the chapel.
Once inside, the archbishop refreshed a history lesson that some in the group already knew. This was the titular church of Baltimore Cardinal James Gibbons, and the location of his 1887 address on religious freedom and the principles of American politics.
Archbishop Lori now carries that mantle, as chairman of the U.S. Conference of Catholic Bishops’ Ad-Hoc Committee for Religious Liberty.
“When I come here,” Archbishop Lori said after Mass, “I can almost hear him delivering his famous talk, from which I have quoted so many times. I feel a certain spiritual closeness to the great Cardinal Gibbons.”
During his homily, the archbishop talked about that “wonderful link” between Santa Maria in Trastevere and the archdiocese, and his connection to the two popes about to be canonized.
“These two great popes were champions of religious rights and freedom,” Archbishop Lori told the pilgrims. “In this basilica, where Cardinal Gibbons spoke, let us ask Pope John XXIII and Pope John Paul II to intercede for us, that we might deepen our appreciation and commitment to religious freedom, at home and abroad.”
While waiting for the previous Mass to conclude, the archbishop visited with dozens of pilgrims here on a trip sponsored by the archdiocese and the Catholic Review.
Larry and Linda Webster are parishioners of St. Joseph, Taneytown. He was a charter member of its Knights of Columbus Council 11631, served as its Grand Knight and was pleased to meet Archbishop Lori, the Supreme Chaplain of the Knights.
“That was very nice, he was patient and gentle with us,” said Linda Webster, who noted that the Mass harkened back to pre-Vatican II, as the archbishop, Monsignor Robert J. Jaskot and Deacon George Sisson turned their backs to worshipers to face the altar. “That was déjà vu, the way it was when I grew up.”
The archbishop also met Jean Rogers, a parishioner of Holy Trinity, Glen Burnie, and her sister, Molly Zell, who joined the pilgrimage from her home in Export, Pa.
There was also Diva Brown, a parishioner of St. Clement I in Lansdowne and a native of Colombia who will celebrate her 83rd birthday the day after the canonization.
“A pilgrimage symbolizes how we should look at our lives,” Archbishop Lori said. “We should constantly be visiting with the Lord, deepening our communion with the church, sensing the Lord’s presence at the various points in our lives.
“Many of them talked about their previous trips, but they came to Rome at this particular time, when two saintly popes are being canonized. They are braving the crowds and all the inconvenience, because they want to be with the church universal and with Pope Francis, for this event of great grace and joy.
“I was very edified by being with our pilgrims today.”
Also see:
Archivist: John Paul II display offers ‘chance to relive’ new saint’s Baltimore visit
Pilgrims follow saints’ examples to Rome
Our Lady of the Mountains parishioner feels at home in Italy, with religious men and women
The canonizations of two popes, by the numbers
Pope John Paul II’s visit to Baltimore touched many lives
Blog: A look back at Blessed John Paul II’s 1995 visit to Baltimore
PrevNext