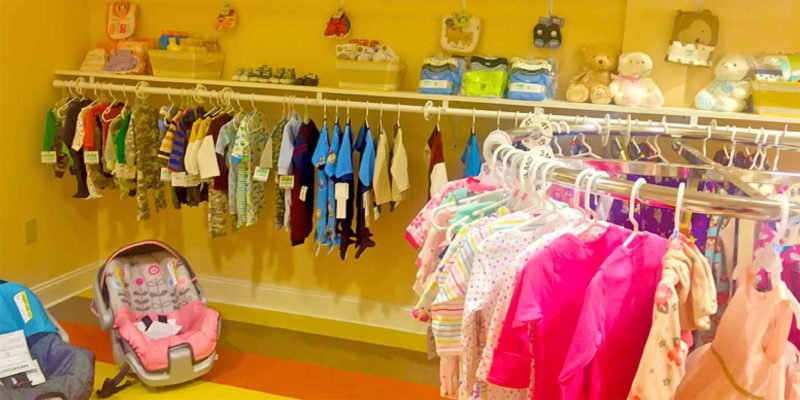 Through the generosity of supporters, the Women’s Care Center in Overlea is stocked with clothing, car seats and other supplies for expecting parents . (Kevin J. Parks/CR Staff)

OVERLEA – A young pregnant woman was recently dropped off at Whole Woman’s Health of Baltimore, an abortion provider on Belair Road, but felt drawn instead to the small storefront building across the street with a simple name – Women’s Care Center.

Now she has decided to keep her baby.

“It’s a powerful example of the pro-life work being done here in a humble way,” said Father Jesse Bolger, pastor of St. Joseph Parish in Fullerton, at an Aug. 30 dedication of the center by Baltimore Archbishop William E. Lori.

“We’re here to out-love,” said the archbishop, “to out-love the enemies of human life. We’re here to bear witness by extending love and hospitality and caring to women, children and families.”

The Women’s Care Center, located at 7625 Belair Rd., opened May 9 and has since performed more than 130 ultrasounds for expectant mothers, thanks to a machine paid for by donations from the Knights of Columbus, especially the Cardinal Gibbons and Father Burggraff councils.

In addition to pregnancy tests, ultrasounds and counseling, all free of charge, the center provides other supports for mothers-to-be and new mothers, including parenting classes and help with essentials such as car seats and clothing.

Millie Lopus, center director, said that her own experience with a crisis pregnancy while studying at what is now Loyola University of Maryland adds a personal dimension to her work.

A top athlete in tennis, she became pregnant going into her senior year and was taken to a Planned Parenthood location.

“I almost had an abortion, but by the grace of God and – I say – because of my dad’s novenas, I decided not to do it,” she said.

She gave up her daughter for adoption, and, three years later, the little girl received a kiss from St. John Paul II while with her adoptive parents.

“She was kissed by a saint,” marveled Lopus, a parishioner of the Shrine of the Most Blessed Sacrament in Chevy Chase who has since raised three children of her own and hopes to meet her first daughter someday.

Lopus is joined at Women’s Care Center by Amy Erardi, who performs the ultrasounds, and Leigh Anne Taberno, a counselor. Another counselor will be added in October.

No stranger to the area, Erardi had once been stationed on the sidewalk in front of Whole Woman’s Health, the abortion facility, as part of the 40 Days for Life movement. She and her fellow pro-life campaigner, Jody Ward, had heard of Women’s Care Center, which currently has 25 locations across the country, and requested that a new center be established to counter Whole Woman’s Health.

“Where we locate, the abortion rate significantly declines, even in the first or second year,” Lopus said, adding that the combination of sonogram and counseling leads to 97 percent of women choosing not to abort.

The dedication brought out approximately 50 to Women’s Care Center, including Monsignor James P. Farmer, pastor of St. Thomas More in Baltimore; Father Jose “JoJo” Opalda, administrator of St. Michael the Archangel in Overlea; Father Joseph Muth Jr., pastor of St. Matthew in Northwood and the Church of the Blessed Sacrament in Baltimore. Stephen Cohen, state deputy of the Knights of Columbus, Maryland State Council, was also in attendance, along with numerous pro-life advocates and volunteers.

“Our church is all about building a culture of life,” Archbishop Lori said. “It’s all about respecting the God-given gift of life, from the moment of conception to natural death.”