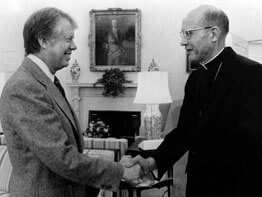 A career Vatican diplomat, Archbishop Jadot represented the Vatican in the United States from 1973 to 1980.

After leaving Washington, the archbishop served as pro-president of the Secretariat for Non-Christians, now called the Pontifical Council for Interreligious Dialogue. He retired in 1984.

Announcing the archbishop’s death Jan. 21, Cardinal Godfried Danneels of Mechelen-Brussels said Archbishop Jadot was not well-known in Belgium, since he spent so much of his life outside his homeland, but he was well-known in the United States.

The cardinal said that while full U.S.-Vatican diplomatic relations were not formalized until 1994 Archbishop Jadot helped pave the way.

“At a moment when the eyes of the whole world were on the White House, this man of the church returned to the house of the Father,” the cardinal said. “May Archbishop Jadot continue to watch over the American nation, which was close to his heart.”

As a Vatican diplomat, he served in Laos, Singapore, Malaysia, Thailand, Equatorial Guinea and Cameroon before being named apostolic delegate to the United States.

He also had served as a military chaplain for the Belgian armed forces when they controlled Congo and worked as national director of the Pontifical Mission Societies of Belgium.

When he arrived as the first non-Italian to represent the Vatican in the United States, Archbishop Jadot said he hoped to be a link between Pope Paul VI and the U.S. church, other Christians, Jews, “all those who believe in God and every man of good will.”

“The future of the world demands that all who seek justice, truth, liberty and love must unite,” he added.

Archbishop Jadot’s seven years as apostolic delegate in the U.S. included two key church events in the bicentennial year, 1976: the International Eucharistic Congress held in Philadelphia in August and the national Call to Action conference in Detroit that October.

In a letter to Cardinal John Dearden of Detroit, Archbishop Jadot called the two gatherings complementary. The eucharistic congress “was more centered on the transcendent thrust of Christian life,” while the Call to Action meeting “focuses more strongly on the social dimension of our religion,” he said. “It will serve to renew our awareness of the responsibilities we have in a changing world.”

As apostolic delegate, Archbishop Jadot was seen as an advocate of social justice and a backer of the appointment of more pastorally oriented bishops. He was involved in more than 170 appointments or transfers of U.S. bishops during his tenure.

Looking back on his U.S. years, the archbishop said it “hurt me very much to see” the wealth and level of comfort in America after spending years in Africa and Asia. But he said he was impressed by the generosity of U.S. Catholics and the rising level of intellectual life among them.

He was critical, however, of what he saw as parochialism among Americans and said they needed a broader view of the world.

“They tend to consider their own problems and their own well-being first and not to be concerned for the traditions and cultures of those other countries – what’s good for people in other countries,” he said.

In 1978, Pope John Paul II named Archbishop Jadot the Vatican’s first permanent observer to the Organization of American States, in addition to his post as apostolic delegate.