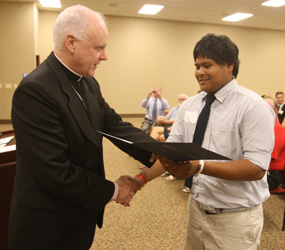 Nate Nocket saw a void and was compelled to fill it.

Alex DeNuzzio is helping his peers express their faith in new, dramatic ways.

Tierra Stone believes it is her time to lead.

All three were among 37 young people honored at the annual Eagle of the Cross ceremony at the Archdiocese of Baltimore’s Catholic Center June 15.

Given by the Division of Youth and Young Adult Ministry, the Eagle of the Cross award recognizes those who have shown apostolic action, Christian leadership and moral integrity.

Each young person is typically nominated by a parish or high school.

“They proved themselves at an important stage in their lives,” Archbishop Edwin F. O’Brien said after the ceremony. “We want to keep that momentum going because we need them in our parishes and in our communities.”

The archbishop began by praying over the 27 honorees present. Later, he posed for photos and offered words of encouragement.

“Stay with it,” he told many of those honored. “We need you.”

Nocket, 18, said he had little doubt that he was called to help his parish, St. Joan of Arc of Aberdeen. A veteran of High-Li, the archdiocesan youth leadership program, Nocket is the president of his parish’s youth group, a peer minister and a lector.

“That really motivates me, pushes me and keeps me going,” Nocket said. “The top thing is my faith.”

DeNuzzio, 18, is active in the Youth Theater of North Baltimore County at Our Lady of Grace in Parkton. Although he has acted in the past, DeNuzzio is now mentoring other young performers in the God-centric shows. He also does piano accompaniment.

“It really feels special to be recognized for this,” DeNuzzio said. “It’s quite an honor.”

St. Ambrose, Park Heights, parishioner Tierra Stone said she wants to help others. The student of St. Frances Academy in Baltimore is an altar server, a lector, an usher and a member of the youth group. Tierra is also active in a 4-H club.

“We are the generational change of the church,” Tierra said. ““There has to be someone to take the lead, be bold, stand tall and who is proud of being Catholic.”