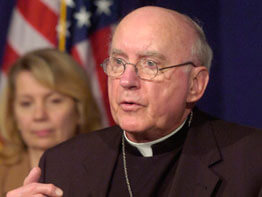 As coadjutor archbishop of the archdiocese for the past year, Archbishop John C. Nienstedt, 61, automatically succeeds him.

The changes were announced May 2 in Washington by Archbishop Pietro Sambi, apostolic nuncio to the United States.

Archbishop Flynn’s resignation was accepted on the day he turned 75, the normal retirement age for archbishops.

“I am grateful to His Holiness, Pope Benedict XVI, for his confidence in naming me archbishop of St. Paul and Minneapolis,” Archbishop Nienstedt said in a statement. “It is a tremendous responsibility for pastoring the people of God now assigned to my care. I ask for the prayerful support of both Catholics and non-Catholics alike.”

He congratulated Archbishop Flynn on his birthday and thanked him for his nearly 14 years of service to the archdiocese.

“I am so grateful that he is planning to stay in the local area and be available for consultation. I know I can stand tall on the shoulders of Archbishop Flynn and his predecessors,” Archbishop Nienstedt said.

Archbishop Nienstedt had been bishop of the Diocese of New Ulm, Minn., until his appointment to St. Paul and Minneapolis. A native of Detroit, he was ordained a priest in the Archdiocese of Detroit in 1974. He became an auxiliary bishop of Detroit in 1996 and subsequently was appointed to New Ulm in 2001.

He served in the Vatican Secretariat of State, 1980-1986; as rector of Sacred Heart Seminary in Detroit, 1988-1994; and as pastor of the Shrine of the Little Flower in Royal Oak, Mich., until his appointment to New Ulm.

In 2006, he led a postcard campaign through the Minnesota Catholic Conference urging Catholics to write their legislators in support of a ballot measure that would amend the state constitution to define civil marriage as between one man and one woman. The effort was voted down in a state Senate committee and never made it on the ballot.

In the U.S. Conference of Catholic Bishops, Archbishop Nienstedt has served as a member of the Ad Hoc Committee on Catholic Health Care Issues and the Church, as chairman of the Committee on Priestly Formation and as head of a subcommittee that drafted the fifth edition of the Program of Priestly Formation. Adopted by the bishops in 2005, the program sets the national norms and principles that must be applied in all U.S. seminaries.

Archbishop Nienstedt also was one of the bishops who served on teams to conduct Vatican-coordinated visits to every U.S. seminary and assess their strengths and weaknesses in the wake of the U.S. clergy sexual abuse scandal.

In 2003, when 17 of the 77 priests in the New Ulm Diocese wrote to the head of the USCCB requesting that the bishops discuss optional celibacy for priests, Archbishop Nienstedt said that making celibacy optional would “end up discouraging priestly vocations.”

“The gift of celibacy and its witness is needed now more than ever,” he said.

Archbishop Flynn has been credited for helping boost enrollment at St. John Vianney Seminary in St. Paul during his tenure. The increased enrollment has corresponded to a rise in ordinations to the priesthood in the archdiocese.

The archbishop also received wide praise for his work as head of what was then the bishops’ Ad Hoc Committee on Sexual Abuse at the height of the clergy sexual abuse crisis. The committee supervised a two-year review of the sex abuse prevention policies contained in the “Charter for the Protection of Children and Young People,” adopted in 2002. He took a particularly strong stand in favor of the bishops’ “zero tolerance” policy under which any priest who admitted or was proven to have committed at least one act of child sex abuse would be removed from all ministry.

A native of Schenectady, N.Y., Archbishop Flynn was ordained to the priesthood for the Diocese of Albany, N.Y., in 1960.