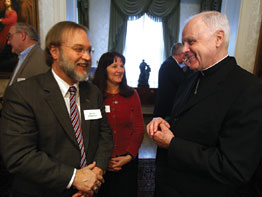 Brian and Barbara Bolger weren’t shocked when their son, Jesse, told them he wanted to become a priest. Parish priests had always been close friends of the family, they said, and Mr. Bolger’s uncle was also a clergyman who sometimes played basketball with the Bolgers.

Good role models for the Christian life abounded in a home that made the practice of the faith a top priority.

“We often say that we’re really humbled by his decision,” said Mrs. Bolger, a parishioner of St. Peter the Apostle in Libertytown. “We can hardly believe that God chose Jesse. We consider it an honor and we do everything we can to support him.”

The Bolgers were among more than 50 parents of priests and seminarians who attended a special Feb. 22 Mass celebrated by Archbishop Edwin F. O’Brien at the Basilica of the National Shrine of the Assumption of the Blessed Virgin Mary in Baltimore. The archbishop thanked parents for their faithfulness and for their devotion to the church.

“I think vocations start in the home,” Archbishop O’Brien told The Catholic Review following the liturgy, which was held in the undercroft chapel.

“The parents here today are very strong Catholics,” he said. “It’s a reflection of the church in Baltimore. I hope this will help bring attention to the role of the family in fostering vocations and encourage some families to talk about it more frequently and for parishes to bring it up.”

In a reception at the cardinal’s residence, the archbishop told parents priests exist today because of their faith.

There is nothing for parents to fear if their sons are considering the priesthood, according to Mrs. Bolger.

“The Holy Spirit makes us brave people, so we should be able to try things and not be afraid of failure – especially with something as good and generous as one who serves the Catholic Church.”

Mary Ann Langan, whose son, Joseph is a seminarian, said parents should encourage their children to be open to God’s call.

“You have to set an example of prayer,” said Mrs. Langan, a parishioner of St. John, Westminster. “We’ve always tried to make prayer first and foremost in our family. The best thing is to encourage them and don’t be negative if they are thinking about the religious life.”