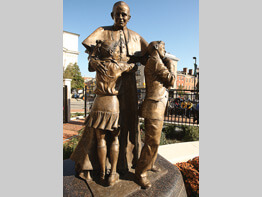 Seeing himself cast in bronze alongside Pope John Paul II in a new downtown statue brought back a flood of memories for Justin Farinelli.

The 7-foot-tall, 850-pound statue, which stands as the centerpiece of the new Pope John Paul II Prayer Garden, was inspired by a photograph of the pope embracing two children – one of whom was Mr. Farinelli – during the pontiff’s 1995 visit to Baltimore.

“I remember being so awestruck by the pope,” said Mr. Farinelli, a former parishioner of St. Jane Frances de Chantal in Pasadena who was 9 when he met the pope during an arrival ceremony at Baltimore-Washington International Thurgood Marshall Airport.

“It was so much of a shock as he pulled me in and hugged me,” said Mr. Farinelli, now a 22-year-old personal trainer living in Florida. “I felt like I was the only person with the pope.”

Glancing at the larger-than-life statue, Mr. Farinelli said it was amazing to have his special moment forever memorialized in bronze. Joseph Sheppard, the Baltimore artist who sculpted the figure at his studio in Pietrasanta, Italy, “did an incredible job,” Mr. Farinelli said.

While the photo shows a young Mr. Farinelli facing the pope, the artist portrayed the boy turning the other way.

“The pope has such an incredible legacy,” the young man said. “It’s just amazing to be a part of that.”

Calling it a “testament to the natural beauty of God’s creation,” the archbishop said the garden will serve as a living monument to the pope’s historic visit.

“It is also our hope as a faith community deeply rooted in this city for more than 200 years that this garden will become a sanctuary in a suffering city where too many street corners are just places where drug deals take place and tragedy inevitably follows,” said Archbishop O’Brien.

The archbishop prayed that the garden, located just north of the intersection of Charles and Franklin streets, would “inspire the rebirth of many, many more Baltimore street corners and reflect the love of God that was so evident”

Cardinal William H. Keeler, who first envisioned the garden, joined the archbishop and Mr. Sheppard in unveiling the statue, which is perched on a polished granite base.

Catching their first glimpse of the artwork as the white cloth that covered it sunk to the ground, about 150 people applauded and cheered while retired Archbishop William D. Borders and other dignitaries looked on.

In an interview with The Catholic Review, Mr. Sheppard said he included small details in his statue to make it rich in subtle symbolism.

“I put a little fish on the boy’s belt buckle as the sign of Christianity,” he said, “and for the boy’s face, I borrowed from (Gian Lorenzo) Bernini’s angel in Rome.”

Mr. Sheppard, who previously painted a portrait of Pope Benedict XVI, said he was stunned by the way the morning sunlight bathes his statue.

“It’s just absolutely perfect,” he said. “They put up spotlights that will do the same thing at night.”

Designed by the Baltimore landscape architecture firm of Mahan Rykiel Associates, Inc. and constructed by Conewago Enterprises of Hanover, Pa., the garden features many other symbolic elements.

The Kousa dogwood trees have blooms that tell a visual story of Christ’s crucifixion, Archbishop O’Brien said, and the flowers have historically been tied to the Blessed Virgin Mary. He added that the overall elliptical shape of the garden mirrors that of a fish.

The yellow and white fall annuals are the same colors as the papal flag and in the spring, blooming annuals will be red and white – the colors of the Polish pope’s homeland.

Located near the Basilica of the National Shrine of the Assumption of the Blessed Virgin Mary, which was erected by Archbishop John Carroll as a symbol of religious freedom, the garden echoes many of the same themes.

A large granite wall facing the statue is inscribed with a quote about religious freedom from the pope during his visit to the Cathedral of Mary Our Queen. Stainless steel bands are also embedded in the wall and bear the symbols of Christianity, Islam and Judaism.

Concrete pillars hold the seal of the Baltimore archdiocese and the coat of arms of Pope John Paul II.

A mural that will depict flowers traditionally associated with the Blessed Virgin Mary will eventually cover the wall of a parking garage that stands at the rear of the garden. Archdiocesan officials are awaiting city approval to install the murals.

Beverly Anne Williams, a Baltimore mezzo-soprano, sang “Ave Maria” and “Amazing Grace” during the dedication, and Baltimore First Deputy Mayor Andrew Frank conveyed Mayor Sheila Dixon’s thanks to the archdiocese for erecting the $1.3 million garden, which was funded by private donations.

“It will be a beautiful and meaningful addition to our community, our city and the Charles Street scenic byway,” said Mr. Frank. “It’s a fitting tribute to a peaceful, spiritual leader who believed the future starts today, not tomorrow.”

Melissa Brent, a parishioner of St. Pius V in Harlem Park, was the 7-year-old girl in the photo with Mr. Farinelli. Now a 20-year-old nursing student at the University of Maryland at Baltimore, Ms. Brent told The Catholic Review in a telephone interview she was “at a loss for words” to discover that she is depicted in the statue.

“It’s an inspiration to many people and to me personally,” said Ms. Brent, who was not at the ceremony. “When I have children one day, I can take them down and share that experience with them.”

Ms. Brent said her life has been filled with blessings since she met the pope as a third grader at St. William of York School in Baltimore. She prays to him every night, she said.

To see video from the dedication, visit www.catholicreview.org.