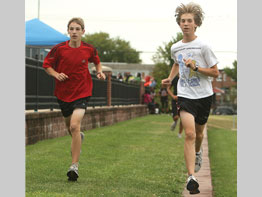 When Gene Hoffman sat down to check his e-mail Aug. 27, a story from the Catholic News Service about a Bible camp in Jamaica waited in his inbox.

The item seemed innocuous, until Hoffman, the long-time cross-country and track and field coach at Archbishop Curley High School in Baltimore, learned more about the origin of an outreach where Jamaican youth began the day listening to the radio to hear the Olympic exploits of their new national hero, sprinter Usain Bolt.

It turns out that the Bible camp was operated by men with links to Curley, and that it was funded by proceeds, $1,100, from the school’s Mother-Son Dance, a relatively new tradition at the school.

“Usually, it’s a break-even event,” Curley President Father Michael T. Martin, O.F.M., said of a social that began in 1998. “They had raised some extra money this year and someone said, ‘How about we send it to Jamaica?’ They really need help, and we know and love the Friars down there.”

Olympic track and field, held at night in Beijing, China, was broadcast live on the radio in the morning in Jamaica.

“Nothing across the island began until after the people listened to the Olympic events on the radio,” Brother Duffy told CNS. “The kids in our camp were no different, especially with the Jamaican Olympians doing so well.”

It was not the first time Curley had helped promote the sport in Jamaica.

Hoffman, a Curley alumnus who competed in Jamaica during a track and field career that took him into the Masters (40-plus) category, routinely sends goodwill packages of shirts, shoes and other gear to the Franciscans who have moved from Curley to Jamaica.

“You never know when certain things come together,” said Hoffman, who like all area track coaches, has become accustomed to watching young Jamaicans dominate the prep 4×400 relay at the Penn Relays in Philadelphia.

“I’m assuming that one of these days,” Hoffman joked, “with all of those shoes we’re sending, one of those kids is going to wind up at the Penn Relays.”

Adding another layer to the connection is Curley’s tradition in a sport that Bolt has come to rule.

After Michael Phelps, Bolt was the dominant male athlete at the Summer Olympics, where he wowed his sport and his countrymen by setting world records and taking gold medals in the 100-meter dash, the 200 sprint and the 4×100 relay.

Hoffman spoke about those links prior to one of the last cross-country practices of summer.

“We don’t have a lot of experience,” Hoffman said, “but I love this group of kids.”