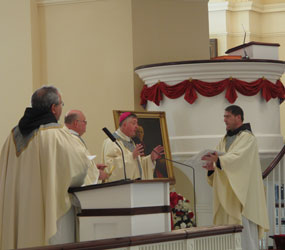 Archbishop Curley High School began its 50th year with a nod to the past and an eye to its future.

Students, families, teachers, alumni, supporters, Conventual Franciscans and archdiocesan priests gathered Aug. 29 for a Mass at the Basilica of the National Shrine of the Assumption of the Blessed Virgin Mary to celebrate the school’s founding in 1961.

Conventual Franciscan Father Joseph Benicewicz, a member of Curley’s Class of 1978, was officially installed by Auxiliary Bishop Mitchell T. Rozanski as president of the school, the first archdiocesan high school in Baltimore established for young men.

“We gather at this historical moment as we reflect on the past 50 years of Archbishop Curley High School and all those who have been students and those who have taught there and the positive role they have played in changing our lives and making better our community,” Bishop Rozanski said.

During his homily, the new president talked about how the school’s namesake, Archbishop Michael Joseph Curley, envisioned a vast Catholic education system in the Archdiocese of Baltimore. Numerous schools were built during his tenure, Father Benicewicz said, and the archbishop dreamed of opening that all-boys school.

Fourteen years after his death, that goal was realized in Northeast Baltimore under the leadership of the Conventual Franciscan Friars.

It has produced some 8,000 graduates, with school leaders having the goal of developing the whole person.

“During these 50 years, much has changed on our 33-acre campus,” Father Benicewicz said. “It is the timeless Gospel values that we proclaim on a daily basis that remain at the heart of our mission.

“The words and examples of Jesus and his good and faithful follower, St. Francis of Assisi, have been echoing through the halls of Archbishop Curley High School through all of the years.”

Reminders of Archbishop Curley were everywhere during Mass.

Senior Sean Gallup, the school’s student government president, led the general intercessions. Afterward, he said he was honored to be part of the Mass and the Curley legacy.

“It was pretty cool seeing a lot of the alumni around,” Gallup said. “I think it’s going to mean a lot to start my year off at the Basilica and ending it here with the Baccalaureate Mass.”