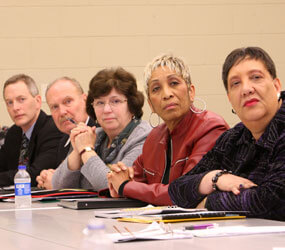 The archbishop announced the consolidation of 13 Baltimore City and Baltimore County Catholic schools March 4. More than 2,000 students and 300 employees are expected to be impacted by the closings, which will come at the end of the school year.

Students are being encouraged to attend specific local Catholic schools in the fall.

“These days have been tough on all of us,” the archbishop told the principals gathered at St. Agnes’ parish hall in Catonsville. “We all know the pain and we all know some are experiencing that pain very, very deeply. I thank you for your sensitivity.”

Skip Sanders, associate superintendent of schools, led the principals in a rendition of the song, “Leaning on Everlasting Arms.”

It set a collaborative tone for the meeting, which is what the archbishop said the archdiocese will need post-consolidations.

The archbishop said: “I go to schools and I’m so impressed. I say, ‘God help me if I don’t assure every one of these kids a good education next year. It’s a priority in my life right now and I lean on your everlasting arms to help me realize that priority for our kids.”

The archbishop praised the receiving principals for welcoming new students in various ways.

“All of these things make a great difference,” Archbishop O’Brien said. “I’m here today to thank you for that and encourage you in that. We have another mile or two to go.”

He asked those principals to be “sensitive” to families coming from schools with lower tuition.

“I don’t think anybody believed it was me calling,” he said to laughs. “I made about 10 to 12 phone calls and reached about four or five (families).”

Locally, School Sister of Notre Dame Rose Marie Rose Gustatus, principal of St. Thomas Aquinas School in Hampden said her 169-student school is ready for a new era. It has a capacity for 220 pupils and already has a waiting list for pre-kindergarten and kindergarten classes. That is the first time that has happened in 10 years.

“We’re being as welcoming as we can,” she said. “We’re saying ‘We’re sorry for you, but we welcome you and want you to be part of our school family now.’ We empathize with the people. It could have been us. We’re thankful… and we’re hopeful we can build up all our schools and continue education in our diocese.”

A high school open house was held March 15 at Cardinal Gibbons School, as students from that institution looked for a new education home. Ten high schools were represented and all came with comfort on their mind

“My hope is we can serve these kids’ needs,” said Mount St. Joseph High principal Barry Fitzpatrick. “It’s a tough, tough time for them.”

Sister Marie Rose said parents have told her they just want a permanent education home for their children.

“That’s my dream for them too,” she said.