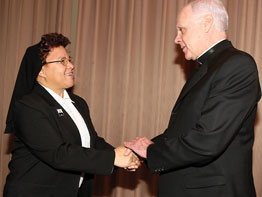 In a March 13 address at Martin’s West in Woodlawn, the archbishop said vocations must be a priority and that teachers should play a role spotting potential vocations and nurturing them.

Archbishop O’Brien also reported on a new study of urban Catholic education recently launched by The Johns Hopkins University in Baltimore, and he announced that he has met with about nine leaders of foundations to seek more support for Catholic schools.

“I have a hunch sometimes that maybe some of our teachers don’t know what to do with vocations – how to spot a possible vocation and what to do about it,” said Archbishop O’Brien.

The archbishop said he has spoken with Father Gerard Francik, archdiocesan vocations director, and Dr. Ronald J. Valenti, superintendent of Catholic schools, about promoting greater vocations awareness in the schools.

Dr. Valenti told The Catholic Review there will be some formal training for teachers to help them become better equipped to foster vocations.

“Something like 85 percent of people in the seminaries today say they are there because someone told them they would make a good priest,” said Archbishop O’Brien.

The archbishop said he was encouraged by his recent meeting with foundation heads. All but one of them was Catholic, and the vast majority of them attributed their professional success to their own Catholic education, he said.

“We asked these foundations to try to help us not only survive but to grow,” said Archbishop O’Brien, noting that all of them were sympathetic to Catholic education. “I’ll make every effort, as did Cardinal (William H.) Keeler, to keep our schools open and to expand them wherever possible.”

The foundation leaders were looking for some assurance that Catholic schools will be around 10 years from now, Archbishop O’Brien said. The Hopkins study, which will be completed by fellows in the MBA program, will help in that area, he said.

“It’s something the foundations are looking for,” said Archbishop O’Brien. “They want hard facts.”

The study will examine issues like school financing, governance, human resources and quality assurance. It will pay special attention to demographics and identifying the best locations for Catholic schools in the city, and it will look at demographic trends in the public schools, Archbishop O’Brien said. The study is expected to be expanded to include the eastern and western vicariates in the future.

The archbishop said he met with the presidents of Loyola College in Maryland, Baltimore; Mount St. Mary’s University, Emmitsburg; and College of Notre Dame of Maryland, Baltimore. He hopes the wider public will learn about the ways those colleges support Catholic education benefitting children of all faiths. He highlighted the partnership between Loyola and St. Mary of the Assumption School in Govans, which provides Loyola tutors and other benefits to the Catholic elementary school.

“It’s a story we should tell more forcefully and more effectively,” he said.

Archbishop O’Brien thanked educators for their ministry. They come from a proud tradition of Catholic education in Maryland, he said.

“The influence you have every day on lives and hearts is something that no one can match,” he said.

Lisa Shipley, principal of Our Lady of Mount Carmel Elementary School in Essex, told The Catholic Review she recognizes the need to step up efforts in vocations.

“Today’s world is full of material things and we talk about children succeeding in so many ways, and there are worries about making sure they are the best students and the best athletes,” she said. “But they are also tomorrow’s leaders in the church.”

Ms. Shipley said she takes a “gentle” approach in nurturing vocations. She knows of one middle-school student who would make a great priest.

“We find opportunities for him to take leadership roles in service-learning and peer ministry,” she said. “We allow him to have an authentic experience that builds success and you go from there.”

Dr. Kirk Gaddy, principal of St. Katharine School – a Queen of Peace cluster school in Baltimore, said he was encouraged by Archbishop O’Brien’s commitment to Catholic education in the city.

The Hopkins study will allow the archdiocese to think “in terms of longevity, security and stability,” said Dr. Valenti.

“We have to look at it from a global perspective,” he said. “We have schools throughout the archdiocese that face the same challenges with regard to economics. The study will look at what we can do to make sure people can make a choice for Catholic education for their children.”