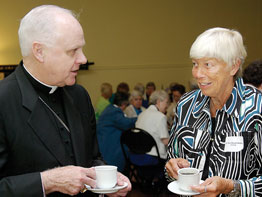 Bishop Denis J. Madden, urban vicar, calls them the “greatest asset any city could have.” They are the hundreds of women and men religious who minister every day in the City of Baltimore – teaching in schools, working in hospitals, running social outreach ministries, praying with the sick, visiting prisoners, caring for the dying, lobbying for social justice and performing countless other acts compassion.

In appreciation for their service, Bishop Madden joined Archbishop Edwin F. O’Brien in honoring the city’s sisters, brothers and religious-order priests with a May 7 dinner at the College of Notre Dame of Maryland, Baltimore.

“If we don’t save the city, we can forget about the church in the Archdiocese of Baltimore,” said Archbishop O’Brien, quoting Cardinal Lawrence Shehan.

The religious of the urban vicariate are doing much to heed Cardinal Shehan’s call to action. Nearly half of the city’s parishes are staffed by religious-order priests, Archbishop O’Brien said. Many sisters, brothers and priests also provide vital outreach to immigrants and work faithfully in Catholic hospitals and schools, he added.

In many instances, Catholic schools provide the only source of hope for Baltimore citizens, the archbishop said.

Without the presence of women and men religious, the city’s ability to provide help to those in need would be “greatly diminished,” according to Sister Margi Savage, S.S.J., a case manager at Marian House in Baltimore who works with recovering addicts in transitional housing.

“There’s something about the presence of religious that gives people a sense of safety and security,” said Sister Margi in an interview with The Catholic Review. “The needs are so great. I think we provide a real sense of stability.”

For the many pilgrims who visit the archdiocesan Divine Mercy Shrine at Holy Rosary, Fells Point, Sister Claudia Kolonko, C.S.M.J., spreads the message of Christ’s mercy. She and other Polish-speaking sisters also minister to the needs of Polish immigrants in East Baltimore, work as parish secretaries and teach children’s catechism classes.

“I know God called us to be here, and he has a plan,” Sister Claudia told The Catholic Review.

Brother John Chung Nguyen, F.S.C., director of technology at The Cardinal Gibbons School in Baltimore, said the annual appreciation dinner is a time for the city’s religious to meet one another and share stories about their diverse ministries.

“We enhance the lives of the people we serve,” he said. “We help build community, and we work as disciples of Christ.”