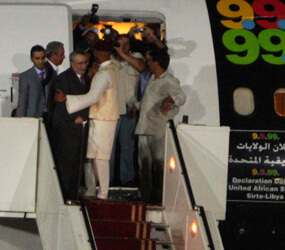 The archbishop’s remarks came in a statement released Aug 25.

Scottish officials freed Megrahi from his life sentence on compassionate grounds Aug. 20, saying he was dying from prostate cancer and had only three months to live. He then flew home to Libya and a hero’s welcome from thousands of flag-waving supporters.

“While as a follower of Jesus Christ I believe in mercy, I also believe that mercy must be tempered with justice,” Archbishop Dolan said. “Mercy can be demonstrated in ways other than by releasing a man responsible for so much pain, suffering and death. Those who lost loved ones also deserve mercy and justice.

“Finally we must consider that the release of this man could encourage others to engage in similar acts of terrorism in the future which would be a tragic result,” he added.

The midair bombing killed all 259 people on board the plane and 11 others on the ground. Many of those killed were American college students heading home for Christmas.