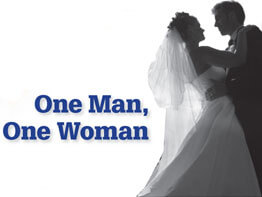 Concerned that two bills passed by the Maryland General Assembly would “significantly erode” the definition of marriage as being between a man and a woman, Archbishop Edwin F. O’Brien is urging Gov. Martin J. O’Malley to veto Senate Bills 566 and 597.

In a letter sent to the governor this week, written on behalf of the Catholic bishops of Maryland, Archbishop O’Brien said the bishops’ “grave concern” with the legislation was “not so much in the privileges these bestow; rather it rests upon the firm belief that the legal definition of marriage should not be diluted in order to bestow those privileges.”

“In each of the measures, the definition of domestic partnership not only gives a status equivalent to marriage to same-sex couples, but also is so broad and ambiguous that it can be extended to the most casual of relationships – relationships that can easily be entered into and just as easily dissolved; relationships that assume scarce few of the obligations associated with committed marriages,” Archbishop O’Brien said.

Sound public policy should not equate such relationships with the legal institution of marriage, the archbishop insisted.

“To do so would be an insult to the religious traditions which exalt marriage and regard it as sacramental,” he said. “At a time when communities of faith and society at large strive against formidable cultural forces to address the devastating results of the dissolution of the family structure, it would prove counter-productive.”

If the bills became law, they would “dramatically undermine” the work of the Catholic Church and other faith communities to prepare young couples to remain in sustained, committed marriages, to become “involved and loving parents” and to “maintain stable home environments for their families,” according to Archbishop O’Brien.

“How can we succeed in these efforts – efforts that benefit all of society – if our government explicitly recognizes in law and grants legal benefits to same-sex or opposite-sex cohabitating couples who can simply sign an affidavit announcing their “relationship of mutual interdependence?’” the archbishop asked.

If signed into law, the measures would give a “positive legal sanction to behavior that overtly contradicts the understanding of marriage held by faith traditions and civil society since civilization’s onset,” Archbishop O’Brien said.

The archbishop acknowledged that it “may well be” that certain rights and privileges currently granted by law to persons who are married should be made available to couples who are not.

“But this should and easily might be accomplished in ways that do no damage to the institution of marriage and the high status historically accorded to that institution by our laws,” he said.

The archbishop argued that the free provision of advance directives and hospital-visitation privileges sought by proponents of Senate Bill 566 have been available since Senate Bill 369 was enacted in 2006.

“Senate Bill 566 goes beyond that 2006 enactment by assigning those medical decision-making prerogatives without also requiring domestic partners to complete an advance directive,” he said. “With the advance-directive requirement removed, any two 18-year olds can enter a domestic partnership and grant to one another decision-making rights (e.g., whether to maintain or remove life support, donate body organs, or be buried or cremated) that neither is likely to have properly contemplated.”

The archbishop noted that “should one young partner face a medical emergency or sudden death, the other would hold responsibility – usurping that of parents or any other family member – for making critical decisions.”

“Further, the law makes no provision for the dissolution of domestic partnerships, and the status of medical decision-making rights of prior partners,” he said. “On practical considerations alone, this ill-conceived, poorly crafted legislation poses serious concerns regarding its application in real-life circumstances.”

“Once again, this legislation offends the moral principles our law should uphold by granting to cohabiting couples a positive financial incentive to avoid the legal commitments of marriage through an easily accessible, transparently transitory, state sanctioned alternative,” Archbishop O’Brien said.

Catholic pastors throughout Maryland are also sending letters to the governor this week asking him to veto the bills.