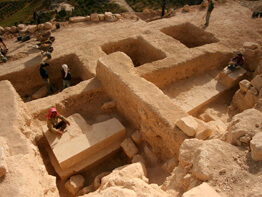 HERODIUM, West Bank – After three and a half decades of scouring this dusty, heat-scorched mountainside, Israeli archaeologists said they have finally found the elusive tomb of King Herod the Great.

The location and unique nature of the finds as well as the historical record leave no doubt that the finds are the remains of the king’s burial site, despite there being no inscriptions, said Ehud Netzer, the Hebrew University professor of archaeology who has led the excavations at Herodium since 1972. The dig uncovered the various buildings at the towering cone-shaped site which King Herod, who ruled Judea on behalf of Rome from 37 B.C. to 4 B.C., had constructed.

Only one or two other sarcophagi of this monumental size and quality have been discovered, he said.

“Not every rich Jewish citizen of the time could afford a sarcophagus like this,” he said. “It is really a royal one. The stone work is very different. It is really an important, well-executed monument. It is a great satisfaction (to have found it.) I am not sure I myself have fully digested it yet.”

Because of ancient texts, archaeologists have long known where King Herod was buried, but they had been unsuccessful until now in their search for the actual mausoleum.

Over the past three years a team lead by Netzer began circling in on an area on the northeastern slope of the hillside which the ancient king, well-known for his architectural feats, had constructed some nine miles south of Jerusalem in commemoration of a military victory. The palace complex he built at the summit was said to be among the most spectacular of his building projects, and it was here that he chose to have his remains buried.
Dominican Father Jerome Murphy-O’Connor of the French Biblical and Archaeological School of Jerusalem called the discovery “really important” and congratulated Netzer for his perseverance in his search for the tomb.
“It is wonderful to have found pieces of the sarcophagus. (Ancient Jewish historian) Josephus Flavius is perfectly clear that Herod was buried there,” said Father Murphy-O’Connor, noting that it would not surprise him if no inscription was found because of the ancient custom of blotting out any mention of a reviled leader such as King Herod.

Jews of the period despised the ruler as an instrument of the Roman Empire.
“Herod was detested by everyone,” said Father Murphy-O’Connor. “He was hated by everyone because his rule was very strict, and there was an erosion of civil liberties, although there was economic growth.”

Riddled with disease and on his death bed in Jericho, King Herod collected all the nobility of the city and gave the order that they be killed upon his death so that “Judea would weep,” said Father Murphy-O’Connor.

But in addition to his numerous edicts, which included the killing of three of his sons and one of his wives, King Herod was also renowned for magnificent building projects. Archaeologists believe Herodium to be the most outstanding among the king’s projects.

Herodium is surrounded by Arab villages, with Bethlehem in view just on the horizon, and the Israeli excavation at the site was interrupted several times since 1980 because of violence associated with the first and second Palestinian uprisings. Toward the end of 2005, the dig was renewed after a five-year break.

For the most part, Netzer said at a May 8 press conference in Jerusalem, it was largely believed that King Herod’s tomb would be somewhere below a tower at the tomb estate at lower Herodium, which originally had been planned as King Herod’s burial site. Excavation work in this area revealed Byzantine remains including a church, a ritual bath and two monumental buildings, as well as a large route more than 1,000 feet long and almost 100 feet wide, believed to have been prepared for the funeral.

When this area had no tomb, the archaeological team began to look elsewhere. Their big break came one morning in late April, when workers began finding large pieces of pinkish Jerusalem limestone with intricately engraved rosettes, part of a stone coffin. Netzer and his colleagues, Yaakov Kalman and Roi Porath, estimate the coffin to have been some eight feet long. They speculate that the sarcophagus had a triangular cover and was decorated on all its sides.

“I knew we had come to the right place the moment we started to find pieces of a sarcophagus. We started to understand we were getting close to our target,” said Netzer.

Josephus, who left a well preserved historical record, described the site of Herodium and the king’s funeral in great detail but did not mention the tomb.

He wrote that the lavish funeral procession that began in Jericho was attended by family members, a contingency of foreign guards – all in war garb – from around the ancient world and 500 of King Herod’s servants carrying spices. King Herod was carried on a bier of solid gold studded with precious stones with a covering of purple. The body itself was also covered in a purple robe, and a gold crown was placed on the head, with a scepter beside his right hand.

None of the riches described by Josephus has been discovered at the site and may have been looted centuries ago.

Netzer said the sarcophagus and monument were likely destroyed by Jewish rebels who took hold of the site between A.D. 66 and 72, during the first Jewish revolt against the Romans.

The destruction of the coffin into hundreds of pieces demonstrated a lot of rage and anger, said Netzer.

He said that at times he feels pessimistic as to whether archaeologists will find enough architectural pieces to put together the walls of the actual monumental building surrounding the 30-feet-by-30-feet base podium they have found where the sarcophagus once stood.

“We are finding pieces, but I don’t know if we will ever get the full building,” he said.