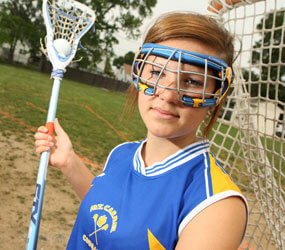 It’s a rare day when Kelly Aquilla cannot be found somewhere on the campus Our Lady of Mount Carmel in Essex.

“It’s extremely busy,” she said. “I have to write myself little notes. My planner’s always filled.”

A junior at Mount Carmel High School, Aquilla is a mainstay in clubs, teams and academic organizations at the 50-year-old institution. She’s also an integral part of Mount Carmel parish life, and attended elementary school at what is her home away from home.

“I think it’s the family atmosphere,” she said, about why she enjoys Mount Carmel. “Something’s always kept me here. After a while, you just fall in love with the place. Everyone’s so kind.”

Aquilla’s an academic standout, earning a 3.7 grade point average. She’ll serve as historian for the National Honor Society next year. After acting as treasurer in student government this year, she’ll be a representative on the SGA starting in the fall.

She just wrapped up lacrosse season and while wins were not common, she said the team is improving.

She’s a setter on the volleyball team in the fall, and in the winter, Aquilla plays on the newly formed indoor soccer team.

Aquilla has been an active participant in the school’s dance and choral groups over the years and acts at cantor during weekend Masses.

“I think singing is definitely something I about for the future,” she said. “I love any opportunity to sing. I am not going to turn down an opportunity to praise God.”

Aquilla plans on taking part in the Archdiocese of Baltimore-sponsored High School Leadership Institute. She’s also taking part in a principal’s advisory group that she says will help make the school more cohesive.

“I just want help bring everyone together,” Aquilla said.