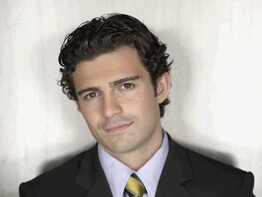 FORT WORTH, Texas – Tarek Saab became an instant celebrity after appearing on NBC’s “The Apprentice,” one of the most highly rated and critiqued shows on network television.

He spent 10 weeks on the reality show last year before hearing the words “you’re fired” from the program’s executive producer and host, Donald Trump.

While the 27-year-old lost a chance to work for the high-profile financier, he gained valuable insight into the power of fame and its impact on society.

He feels the culture “is totally, undeniably addicted to entertainment.” He urges young people to spend less time on entertainment and more on the world around them.

“It’s no mystery that those in the entertainment world have a strong voice with youth. I’m trying to do something positive with the voice that’s been given to me,” he told the North Texas Catholic, newspaper of the Diocese of Fort Worth.

A Maronite Catholic and daily communicant, Mr. Saab uses his business acumen and new visibility to advance pro-life causes across the country.

The show opened doors for him, he said, “and gave me a platform from which to speak about faith to other young people,” he said.

He is the CEO of his own company in Fort Worth called Lionheart, which sells Christian apparel for men. He co-founded it with David Colletti, 27, a practicing attorney and Lionheart’s chief operating officer. The two met as students at The Catholic University of America in Washington.

Mr. Saab spoke in mid-January at the Life Revival Youth Rally 2007, which drew more than 375 teens and their parents.

Selected as a cast member for the fifth cycle of “The Apprentice” after a production crew visited his office at Texas Instruments in Dallas, Mr. Saab told his audience that he was surprised to find himself showered with attention just days after the first show aired.

“Every day I’d go on the Internet and see my face splattered on the screen and people talking about me on blogs,” he explained. “There were different articles in the newspapers too. … People are really captivated by reality TV, and that’s a little bizarre.”

Mr. Saab, who does not own a television set, advised his listeners to stop spending so much time on entertainment and start thinking about what’s really happening in the world around them.

“There’s a lot going on out there (that) we need to know about,” he said. “In the past 50 years, there’s been a complete disregard for the dignity and sanctity of life.”

Besides abortion and teen pregnancy rates having an effect on society, he said, there are other issues young people need to study, including infanticide, euthanasia and embryonic stem-cell research.

“Why do we need to know about these things? Because, as my father used to say, ‘Evil happens when good men do nothing,’” Mr. Saab continued. “And the only way to stop evil starts with a change of heart and a change of behavior.”

“One of the ways we protect those around us from evil in today’s environment is to change the way we act,” he pointed out. “Pornography and how we look at and treat women is part of that. We need to recognize that some of the entertainment we’re addicted to, and some of the things society tells us are perfectly fine, are really not good for us.”

He called women the heart and soul of the family and the world.

He counseled the teenage girls in the audience to show their respect for life through chastity and respecting the physical nature of womanhood.

He also urged his young listeners to study and know their Catholic faith, read the lives of the saints for inspiration and receive Christ in the Eucharist.

Lionheart, launched last August, produces T-shirts and ball caps that incorporate Christian symbols with brief, sometimes one-word, messages from Scripture – such as a black T-shirt with a white cross and the single word printed beneath it: “Testify.”

All of the items are made in the United States, are sweatshop-free and are made from materials that come from countries where religion is not oppressed, according to Mr. Colletti, Mr. Saab’s partner. In addition the company donates 10 percent of its profits to pro-life causes.

In a recent interview with The Catholic Standard & Times, newspaper of the Philadelphia Archdiocese, Mr. Saab and Mr. Colletti said they expect to expand the line to include ties, long-sleeved T-shirts and hooded sweatshirts.

They also will launch a women’s line this spring, under the name Maris Stella, in honor of the Mary’s “Star of the Sea” title. It will include maternity wear.

“I don’t see how you can be a man and not be pro-life,” said Mr. Colletti, who grew up in Philadelphia and attended Catholic high school there.

“One of the greatest things God called men to be is defenders of women and children. We’re called to defend life, especially innocent life,” he said.

Contributing to this story was Susan Brinkman in Philadelphia.