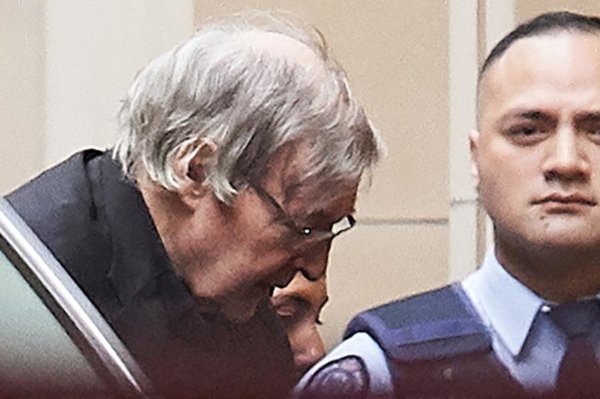 A three-judge panel of the Appeals Division of the Supreme Court of Victoria announced its decision Aug. 21 in Melbourne with the cardinal in attendance.

“Cardinal Pell is obviously disappointed with the decision today,” said his spokesperson, Katrina Lee. “Cardinal Pell maintains his innocence,” and his legal team will study the panel’s judgment before deciding whether to appeal to the High Court of Australia.

Vatican spokesman Matteo Bruni said an investigation of the cardinal by the Congregation for the Doctrine of the Faith would not begin until after the entire civil process concludes.

“As in other cases, the Congregation for the Doctrine of the Faith is awaiting the outcome of the ongoing proceedings and the conclusion of the appellate process prior to taking up the case,” he said.

Nevertheless, Bruni said, as the Vatican affirmed in February when the cardinal’s conviction was announced, “the Holy Father had already confirmed the precautionary measures imposed on Cardinal Pell upon his return to Australia, that is, as is the norm, the prohibition from exercising public ministry and from any voluntary contact whatsoever with minors.”

Possible church penalties, including removing a cleric from the priesthood, are imposed only after the doctrinal congregation completes its process.

Chief Justice Anne Ferguson had read the appeals panel decision during a 30-minute hearing. She said the court was split 2-1 on the cardinal’s argument that the conviction was “unreasonable” given the evidence presented at trial to convict him beyond a reasonable doubt.

“Justice (Chris) Maxwell and I accepted the prosecutor’s submission that the complainant was a compelling witness, was clearly not a liar, was not a fantasist and was a witness of truth,” Ferguson said.

The chief justice also told the court that the three judges unanimously agreed to throw out the two other grounds for appeal: that the cardinal should have presented his not guilty plea in person to the trial jury in December rather than by video and that the cardinal’s lawyers were not permitted to play a 19-minute animation to the jury in their closing statement.

Ferguson said the court decided that Cardinal Pell must continue to serve at least three years and six months of the six-and-a-half-year sentence he received following his conviction in December.

“Whether he will be released on parole will be a decision of the adult parole board, not the court,” she said.

“While reiterating its respect for the Australian judicial system,” the Vatican “recalls that the cardinal has always maintained his innocence throughout the judicial process and that it is his right to appeal to the High Court,” said Bruni, director of the Vatican press office.

“At this time, together with the church in Australia, the Holy See confirms its closeness to the victims of sexual abuse and its commitment to pursue, through the competent ecclesiastical authorities, those members of the clergy who commit such abuse,” Bruni said.

The surviving victim, who cannot be named for legal reasons, said that he never wished to damage the church and he had never sought compensation.

“After attending the funeral of my childhood friend, the other choir boy, I felt a responsibility to come forward,” he said. “Some commentators have suggested that I reported to the police somehow for my own personal gain. Nothing could be further from the truth,” he said through his lawyer, Vivian Waller.

Archbishop Mark Coleridge of Brisbane, president of the Australian bishops’ conference, said the bishops “believe all Australians must be equal under the law and accept today’s judgment accordingly.”

The archbishop also acknowledged the pain of survivors of abuse and the deep differences of opinion among Catholics about whether Cardinal Pell was treated fairly.

Survivor support groups applauded the judges’ decision. “For many survivors, a conviction being upheld against a high-profile, once-powerful perpetrator underlines faith in the justice process and the possibility of speaking out,” said Pam Stavropoulos, spokesperson for the Blue Knot Foundation.

The decision from the three-judge panel followed a two-day hearing June 5-6 in which Cardinal Pell, 78, and his attorneys argued that his December 2018 conviction on five counts of sexually assaulting two choirboys was “unreasonable” given the evidence presented.

The conviction occurred during the second trial for Cardinal Pell. The first trial in September 2018 resulted in a hung jury.

The guilty verdict regarded one count of “sexual penetration,” in this case oral sex, and four counts of indecent acts with or in the presence of a minor under 16 years of age.

The jury accepted the victim’s testimony that the incidents occurred in the sacristy of St. Patrick’s Cathedral in Melbourne in 1996 when the cardinal was an archbishop.

Following the conviction, the former key adviser to Pope Francis was sentenced to six and a half years in prison. He began serving the sentence in March and is being held in solitary confinement in Melbourne Assessment Prison because of the nature of the offenses and his high profile in Australia.

Melbourne Archbishop Peter Comensoli, the cardinal’s successor, said in a statement Aug. 21 that the two trials and appeal demonstrate how “the complexity of the search for the truth in this matter has tested many, and may very well continue to do so.”

The archbishop said his “thoughts and prayers are with the man who brought this matter before the courts,” and said that if the survivor should want pastoral and spiritual support, he was ready to offer it.

Archbishop Comensoli also said, “In Christian charity, I will ensure that Cardinal Pell is provided pastoral and spiritual support while he serves the remainder of his sentence, according to the teaching and example of Jesus to visit those in prison.”

Archbishop Anthony Fisher of Sydney, where Cardinal Pell served as archbishop from 2001 to 2014, said the appeal panel’s “split decision” is “consistent with the differing views of the juries in the first and second trials, as well as the divided opinion amongst legal commentators and the general public. Reasonable people have taken different views when presented with the same evidence and I urge everyone to maintain calm and civility.”