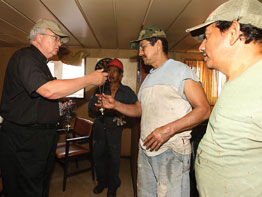 When the merchant ship Snow Bird pulled into the port of Baltimore with its cargo of steel in early April, the crew expected a short layover before continuing to the next destination.

Instead, a portion of that crew has been stranded aboard the vessel, docked at the CNX Marine Terminal in Dundalk, while officials decide the fate of them and their ship.

The plight of those seamen is being made more bearable, however, thanks to the Archdiocese of Baltimore’s Stella Maris Apostleship of the Sea (AOS) ministry and donations from parishioners at St. Rita, Dundalk.

The Apostleship has been delivering everything from cereal, soda and peanut butter to phone cards, puzzles and religious items to the 13 remaining crew members aboard the Snow Bird.

“They cannot leave the ship,” said Monsignor John L. FitzGerald, head of the AOS ministry. “They have to stay and take care of it. It’s a very stressful situation to be sitting on a ship all this time.”

Coast Guard Lt. Rob Kistner said the Snow Bird has been detained since it arrived in port April 11 due to possible safety concerns under an International Maritime Organization detention.

According to Monsignor FitzGerald, most of the Latin American crew cannot go ashore because of immigration rules.

Apostleship of the Sea volunteers visit each ship that arrives in the Port of Baltimore, offering a helping hand to all sailors who are in need of spiritual support, a ride to local shopping centers or just a sympathetic ear.

The plight of the Snow Bird crew, however, caught Monsignor FitzGerald’s attention.

“I noticed when I walked into the freezer locker that it was very, very bare,” Monsignor FitzGerald said. “We got involved making sure they got what they needed.”

After an appeal to parishioners of St. Rita, located across the street from the Apostleship office, donations of money and supplies were provided by the parish’s chapter of the Society of St. Vincent de Paul.

On the morning of July 3, Monsignor FitzGerald and his assistant, lay chaplain Joseph P. Buccheri, delivered a van-load of supplies to the crew members, who are all Catholic.

“They are just amazed that this (help) is happening for them,” Mr. Buccheri said. “They are so appreciative. If we hadn’t come in like this (as a seafarer’s ministry) this would be very embarrassing for them.”

Phone cards are almost as valuable as food for the seamen, many of whom haven’t seen their families in months.

“They (the volunteers) help,” said seaman Hugo Carias. “I don’t have money to call home.”

Mr. Buccheri was able to obtain a prescription to treat one seaman’s prostate problem, “to help protect his life.”

The world’s merchant seamen contingent is made up mostly of sailors from Third World countries. They are at sea for 10 months of the year and typically spend less than two days in port, leaving little time to acquire new clothing, check in with family members back home, attend Mass and receive the sacraments.

“It’s a very lonely life. It can be very intimidating,” said Monsignor FitzGerald, who spent 29 years as a chaplain in the Navy and speaks Spanish. “When they see our vans pull up, with the logo, they are standing at the quarterdeck waiting for us.”

Monsignor FitzGerald hopes to draw more attention to the Apostleship’s work by having a petition for seafarers and their families included in the Prayer of the Faithful during Masses on Sea Sunday, which will be observed July 13.

For more information on the Archdiocese of Baltimore’s Stella Maris Apostleship of the Sea or to make a donation, contact Monsignor FitzGerald at 443-690-2447.