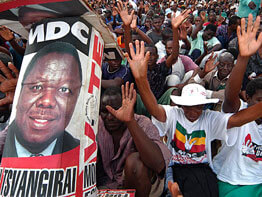 CAPE TOWN, South Africa – Anxiety is growing in Zimbabwe, where the results of March 29 elections are not yet known and the opposition has claimed a resounding victory over President Robert Mugabe, church officials say.

“If the results are released in a transparent way, Zimbabwe will have managed the whole election process well,” Father Frederick Chiromba, secretary-general of the Zimbabwe Catholic Bishops’ Conference, said in a March 31 telephone interview from the Harare, Zimbabwe’s capital.

Father Chiromba said that “election day was quiet” and there was little violence in the run-up to the presidential and parliamentary polls.

“But there is a lot of anxiety about the time it is taking to make the results known,” he said, noting that, “This time we want to make sure it is the vote that counts, not who counts the vote.”

Previous elections in Zimbabwe have been rigged, according to international observers.

All Zimbabweans “are hoping for better times, and a lot depends on this electoral process,” Father Chiromba said.

“No matter who wins, the process needs to be credible,” he said.

Mugabe, 84, who is seeking a sixth consecutive term in office, was challenged by Movement for Democratic Change leader Morgan Tsvangirai and former finance minister Simba Makoni, who ran as an independent.

The Movement for Democratic Change claims that it has secured almost all parliamentary seats in Zimbabwe’s two main cities, Harare and Bulawayo.

Usually the Zimbabwe Electoral Commission, an independent body whose executive is appointed by Mugabe, announces election results “the evening of the voting, or soon afterward,” Father Chiromba said. This time it began releasing results slowly March 31, about 36 hours after polls had closed.

Agence France-Presse reported riot police patrolled Harare March 31 as the Zimbabwe Election Support Network, which had observer status on election day, raised fears that the result was being fixed.

Zimbabwean voters “don’t listen to” threats made by military commanders that they will not serve anyone but Mugabe, Father Chiromba said.

In a break from the past, Zimbabweans were free to attend political rallies of their choice before the elections, he said.

Tsvangirai, who has twice been charged with treason, was badly beaten by the police at a prayer rally last March.

Many Zimbabweans who fled to South Africa to escape economic woes at home returned to cast their votes, said Father Townsend, who was in the South African city of Musina, near the Limpopo River border with Zimbabwe, to monitor the situation over the election period.

“People were encouraging each other to go and vote, saying it’s time for change,” he said.

Zimbabwe has the world’s highest inflation rate – more than 100,000 percent – an unemployment rate of more than 80 percent and severe shortages of basic foods and fuel.

On both sides of the border, “people are hanging around, waiting to see what happens,” Father Townsend said in a telephone interview.

The church in South Africa “is preparing to work with local communities if there is a need,” Father Townsend said, noting that he and others are on the lookout for “large movements of people” out of Zimbabwe.

The refugee office of the southern African bishops’ conference, the U.S. bishops’ Catholic Relief Services, Jesuit Refugee Service and South Africa’s Catholic Health Care Association are part of a church effort to prepare for a possible refugee influx from Zimbabwe, he said.

South Africa is already home to between 1 million and 4 million Zimbabweans.

Two clinics that the association runs near South Africa’s border with Zimbabwe “already serve many refugees,” he said in a March 31 telephone interview from Johannesburg.