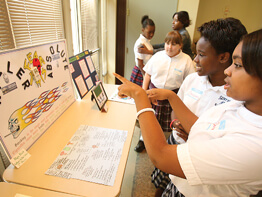 Though her mega-watt smile sparkled as she was given a $50 gift certificate May 30 in the parish center at the Cathedral of Mary Our Queen, Homeland, for winning first place at her school, the Edmonson Village resident said her crusade to persuade her father to quit smoking will persist.

Her flyer “Better Things To Do,” provides statistics about the negative health risks posed by cigarette smoking and lists healthier activities as an alternative.

Armed with a $26,000 grant from the city’s health department, the archdiocese education system invited seventh graders in all of its schools to develop anti-smoking campaigns as part of its Tobacco Use Prevention curriculum, said Dr. Kirk Gaddy, principal of Queen of Peace Cluster: St. Katharine School, Baltimore, and coordinator of the competition.
In addition to a certificate of award, each first-place winner received a $50 gift card from Barnes & Noble and second-place winners took home a $25 gift card from the same bookstore chain, Dr. Gaddy said.

“I think this is a terrific contest, because it’s most effective when kids are educating other kids,” said Dr. Joshua M. Sharfstein, health commissioner for Baltimore City. “Ninety percent of today’s smokers started smoking before the age of 18. All of the students here have started to fight back.”

Winning campaigns displayed throughout the Cathedral parish center came in many forms – from posters to poems.

When Anna Hiser, 12, of School of the Cathedral of Mary Our Queen, was developing her second-place “Smoking Stinks” poster, the Towson resident thought of the repulsive odor she says emanates from burning tobacco products.

Anna’s classmate, William Casey, 14, of Cedarcroft, drew skull and crossbones to drive home the point of his first-place “Smoking Kills, So Why Start?” campaign.

“The image kind of popped into my head when I was working on it,” William said. “The picture really says it all.”

He may post it near his mother, who quit smoking last year, but occasionally sneaks a puff during times of stress.
Bishop Denis J. Madden, urban vicar for the Archdiocese of Baltimore, said the contest delivered some unique anti-smoking campaigns he believed will educate students, their friends and family members.

“You also have to educate yourself,” he told the competition winners. “Your body is a precious gift from God.”