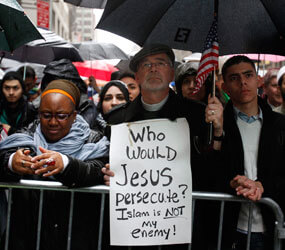 The senator described the Catholic prayer book, written in Lithuanian and published in 1863, as a “family treasure” that his grandmother brought with her when she immigrated to the United States in 1911. The book, the only remaining item from that journey, was considered contraband in her homeland at the time because all prayer books were ordered to be written in Russian.

Durbin, assistant majority leader in the Senate, described his grandmother as “no constitutional scholar” but someone who knew that she would be able to use that prayer book freely in the United States.

“She knew America granted that freedom (of religion) and that’s what this hearing is all about,” said Durbin at the first hearing of the new Subcommittee on the Constitution, Civil Rights and Human Rights.

In opening remarks, Sen. Patrick Leahy, D-Vt., chairman of the Judiciary Committee, also shared anecdotal stories about family faith, but his observations were less upbeat as he recalled anti-Catholic bigotry that his Irish father and Italian grandparents experienced in the United States.

The senators’ comments reflect the range of experience of many religious groups in the United States. While some felt religious freedom for the first time when they came to America, others – simply because of their beliefs – have been threatened and discriminated.

The focus of the March 29 hearing was to closely examine a reported backlash of attacks against American Muslims since the 9/11 terrorist attacks. The hearing took place just weeks after Rep. Peter King, R-N.Y., chaired a House Homeland Security Committee hearing on Islamic radicalization and terrorism in America.

In the packed Senate hearing room during Durbin’s hearing, many speakers said the prejudice and discrimination faced by American Muslims today was no different from what other groups have experienced and should not be allowed to continue, just as it has stopped for the most part for other groups.

Thomas Perez, the assistant attorney general for civil rights, reported a “steady stream of violence and discrimination against Muslims” in the United States since 9/11 terrorist attacks. He said there have been instances of religious intolerance in the workplace, harassment of school students, threats of violence, disputes over Mosques and other actions of bigotry in the past decade.

“The headwinds of intolerance these communities face today are no different from the bigotry confronted by groups throughout our history,” he said, adding that with “each new wave of intolerance” the United States responded by passing new civil rights laws or striking down old laws that sanctioned discrimination.

Perez was confident the country could stop this discrimination by using “every available tool in our law enforcement arsenal.”

Sen. Lindsey Graham, R-S.C., the ranking member on the subcommittee, said he agreed with the premise of the day’s hearing but said the issue of Muslims recruiting radical members for terrorist activities still needed to be addressed.

He did note his full support for Muslims’ freedom of religion, pointing out: “Who’s to say your religion’s not next?” when it comes to facing discrimination.

Cardinal Theodore E. McCarrick, retired archbishop of Washington, who testified on behalf of the U.S. Conference of Catholic Bishops, said Catholics, who have been “the target of religious discrimination,” understand the need to protect the civil rights of Muslims.

In remarks submitted for the record, the cardinal also noted the harm in “attacking those of differing religious perspectives in the name of religion,” which he said can “promote suspicion and fear of all people associated with a particular religious tradition.”

“This kind of generalized religious prejudice is wrong and unjust and a clear violation of religious freedom,” he said.

The cardinal also stressed the importance of interfaith cooperation to gain religious freedoms across the board.

“Solidarity among people of every religion in the face of attacks on people of any one religion is respect for religious freedom in action,” he said, stressing that is why Catholics “stand with our Muslim brothers and sisters in defense of their dignity and rights, just as we welcome and expect their reciprocity and solidarity with us when the rights of Christians and other religious groups are violated around the world.”

The group Shoulder-to-Shoulder – a coalition of U.S. religious leaders working to end anti-Muslim bigotry – made a similar observation in submitted remarks that Durbin quoted at the end of the two-hour hearing.

The statement deplored the incidents of violence against Muslims – particularly desecrations of Islamic houses of worship or sacred texts – and said “to attack any religion in the United States is to do violence to the religious freedom of all Americans.”