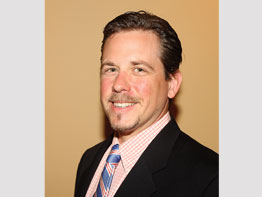 Getting to know the Loyola Blakefield, Towson, community is at the top of Anthony Day’s agenda as he begins his inaugural year as principal of Loyola’s upper school.

“My goal is to come in and learn about the culture and see what role I can play in moving us forward academically, spiritually and athletically,” said Mr. Day, who most recently served as assistant principal at Regis High School in New York.

“Loyola is a very collaborative community and it is very much driven by a commitment to Catholic, Jesuit education,” he said. “It has a very rigorous academic program and I’d like to build on that.”

Mr. Day grew up on the New Jersey shore. He was an English teacher at Fordham Preparatory School in New York.

A parishioner of St. Joseph in Cockeysville, Mr. Day said he feels “very welcomed” by the Loyola community and looks forward to getting involved in the educational programs offered by the archdiocese.