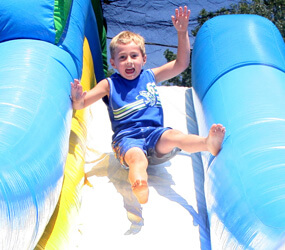 There was little Father Joseph Cosgrove could do to escape.

Caught in the crossfire of a team of children armed with super soakers and water pistols, the smiling pastor of Our Lady of Perpetual Help in Edgewater threw up his hands as rivers of water dribbled down his face. His T-shirt, which was emblazoned with an oversized target mark on the back, was drenched.

“You got me!” the priest yelled, as the delighted youngsters beat a hasty retreat in search of other victims.

The Aug. 30 attack of fun was just one of many lighthearted moments at the second-annual “Good Old Summertime Picnic” sponsored by Holy Family in Davidsonville, Our Lady of Perpetual Help and Our Lady of Sorrows in Owensville.

Held at Camp Barrett in Crownsville, the daylong celebration attracted 1,000 people and started with an outdoor Mass celebrated by Father Cosgrove, Father Joseph F. Barr of Holy Family and Father Mark Logue of Our Lady of Sorrows in West River.

Church leaders said the picnic was a great source of unity for the three parishes as they undergo a clustering process to deal with the priest shortage.

Food was one of the biggest draws. In addition to picnic staples like hotdogs and hamburgers provided by the parishes, families brought side dishes that were spread out on long tables. The smorgasbord of culinary delights included homemade potato salad, coleslaw, bean salad, deviled eggs and cucumber salad.

“I think people went to a lot of effort,” said Wendy Stevens, a Holy Family parishioner who served potato salad in the food line. “You can run to Giant and grab something, but I think people put a little more heart and soul into it. They did their special recipes.”

That creativity was on full display right next to Stevens as Kathy Cole of Holy Family dished out shrimp salad donated by a parishioner. The dish included shrimp, lumps of crab meat, tortellini and an assortment of pasta shells.

Carl and Gloria Donaldson, a couple from Our Lady of Sorrows, enjoyed plates laden with all sorts of picnic fare. Gloria Donaldson was particularly partial to the orange ambrosia.

“It’s made with whipped cream,” she said with a smile. “It’s delicious!”

Not too far away from the food, 5-year-old Daniel Kraus stood on a chair and rested his hands on his knees as he crouched and kept his eyes fixed on racing slot cars that whipped around a large race track. The game is a ministry of Frank Cisneros, a parishioner of St. Mary in Annapolis, who lets parishes use his “Crab Alley Speedway” at special events.

“Go!” the boy yelled as some cars crossed the finish line and others flipped off the track. Other festivities included horseshoes, a rock-climbing wall, Moonbounce, pony rides, swimming and more.

“Hopefully, what this gives them as they get older is a sense of the fact that their faith is something more than just what mom and dad makes them do,” said Daniel’s father, Bill Krause.

The member of the pastoral council of Our Lady of Perpetual Help said the picnic has been a great way to get to know families of neighboring parishes.

Father Barr, pastor of Holy Family, said the pastoral councils and parish groups of the three parishes have already begun meeting to look at ways of working more closely together. A clustering plan will be presented to Bishop Mitchell T. Rozanski at the end of the academic year, he said.

“We want to come up with a plan that makes sure all three churches stay open, stay viable and grow,” Father Barr said.

Joan Jenkins, fellowship coordinator at Holy Family, said there were numerous volunteers from all three parishes who made the picnic a success.

“We’re trying to bring back some of the fun of what families did long ago,” she said. “It’s bringing all of us closer together.”