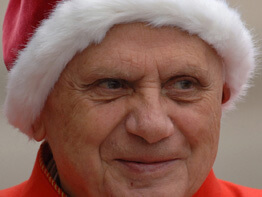 VATICAN CITY – An Italian animal rights group called on Pope Benedict XVI to stop wearing fur out of “respect for the sacredness of the lives of all living creatures.”

The Italian Anti-Vivisection League made the appeal ahead of the pope’s April 22 visit to the Italian city of Pavia, where he was to receive a fur cape made of white ermine pelts.

Having the pope give up fur would be of “great religious and ethical significance” and be “a praiseworthy example of Christian charity,” the group said in an April 13 press release.

Vatican tailors had custom-ordered the fur cape from the Pavian furrier, Annabella, according to the fur company’s owner, Simonetta Ravizza.

“It will be the pope’s decision whether to wear (the fur) or not,” she told the Italian news agency ANSA April 13.

For outdoor events during the colder winter months, Pope Benedict would sometimes wear a “camauro,” a red velvet cap trimmed with ermine, and for special occasions a red velvet, ermine-trimmed cape – called a mozzetta.
The last pope to have worn the traditional fur-trimmed papal hat in public was Pope John XXIII.