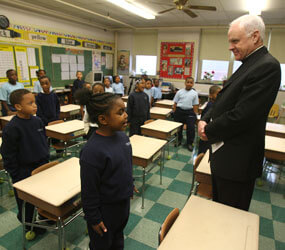 When Monsignor Robert L. Hartnett was appointed executive director of schools planning for the Archdiocese of Baltimore in early 2009, the task was unenviable: head a team that would develop recommendations concerning school consolidations.

The thought of telling the unwelcome news to families, students, teachers and administrators in those communities haunted him.

“I can’t think of anything I have ever initiated that has been this emotionally taxing,” Monsignor Hartnett said. “Sometimes I’ll go to bed in the night, wake up and think about all the people affected and the scope of this whole thing.”

The magnitude of the final decisions, ultimately made by Archbishop Edwin F. O’Brien, came focus March 3, when leaders of 13 schools – 12 elementary and one secondary – were to be told their communities would be integrating into other institutions in the fall. A public announcement was to be made March 4.

A total of 2,160 students will be encouraged to move to other Catholic schools, designated receiving schools. More than 300 jobs will be affected by the consolidations.

In conjunction with the announcement, the archdiocese is releasing a consolidation plan and report titled “Preserving the Tradition, Transforming the Future: The Rebirth of Catholic Schools in the Archdiocese of Baltimore.”

In a letter that opened the document, Archbishop O’Brien said, “This report details the top-to-bottom review that was conducted, the comprehensive research and analysis performed, and the open and transparent process carried out in the last 12 months, including input from more than 1,500 participants.

“I am confident that no stone was left unturned and that this report benefits from that diligence.”

The plan included the names of the consolidated schools, as well as proposed academic enhancements that the archdiocese hopes will reinvigorate Catholic schools.

In Baltimore County, Ascension in Halethorpe, St. Clare in Essex and Holy Family in Randallstown, will not reopen.

The high school that will not reopen in the fall is The Cardinal Gibbons School, in Baltimore. The 297 students at the all-boys school will be encouraged to attend local Catholic high schools.

That leaves nine archdiocesan or parish elementary schools serving the city in the fall of 2010, thanks to the addition of a new one inside Seton Keough High School. The archdiocese said it hopes the new west Baltimore school will eventually have its own building, on Seton Keough’s campus.

(See pages B4-5 for a locator map of consolidated and receiving schools.)

Archbishop O’Brien told The Catholic Review in an exclusive interview that Baltimore remains a top priority during his tenure.

“I heard from city leaders at a recent meeting about our effort to improve our schools, how pervasive poverty is in Baltimore City and how crucial education is to overcoming that,” the archbishop said.

Enrollment has dropped precipitously, particularly in the last few years. With the economic collapse, fewer families can afford rising tuition rates, resulting in an average decline of 1,200 students over the last two years. The archdiocese said that’s the equivalent of four full schools.

Elementary school enrollment was below 20,000 students at the start of the year. Currently, there are more than 10,000 empty seats among 32,500 available.

Baltimore City once numbered nearly a million residents; in the last two decades, the city has dwindled to just above 600,000 people.

According to the report, Catholic schools owed $11.7 million as of December 2009 for unpaid insurance, pension contributions, payroll advances and other subsidies. The report said that schools “are on track to add an additional $2.2 million to that debt for this fiscal year.”

“In addition,” the report said, “schools across the archdiocese are expected to have budget deficits, cumulatively totaling $7.4 million for the current fiscal year. Over the past two school years, the archdiocese will have provided nearly $10 million in scholarship aid and other direct financial assistance to students and schools to fill the financial gap.”

Archbishop O’Brien appointed Frank Bramble, a top bank executive, to chair a Blue Ribbon Committee of education, business and political leaders last year. Its goal was to develop a strategic plan for schools, which should be completed this June.

The committee has worked in coordination with the schools planning office, which was charged with analyzing every school’s viability. Determining which schools would be consolidated proved agonizing.

For people working and studying in schools not re-opening, there will be questions about why their communities were chosen.

The answers, Monsignor Hartnett said, are not simple.

“There was no one issue for an individual school,” said the pastor of Our Lady of Mount Carmel in Essex.

“We looked at the viability studies that took place last year, facilities, finances, enrollment, demographics, the number of school-aged children for those particular areas, whether the local public schools were over-enrolled or under-enrolled, parish demographics, the parish religious education program, their median household income, the per-capita income, where the schools were located and where the students lived.

“Any number of those issues,” he said, “could have been associated with the decision.”

Of the 12 consolidating elementary schools, only one has a student enrollment of more than 200.

“That building is over 70,000 square feet and could accommodate 600 students,” Monsignor Hartnett said. “It’s well below capacity and there are significant capital repair needs there that would reach into the millions of dollars.”

Archbishop O’Brien recognized that church buildings and schools were symbols of hope in Baltimore City. Still, he said, the archdiocese has a larger obligation.

“If we have to choose between saving buildings and saving children, we’re saving the children every single time,” he said.

When Monsignor Hartnett was asked to take a leadership role, he said schools he had a personal connection to might be impacted. The graduate of Cardinal Gibbons and former pastor of St. William of York will see both schools cease operations, which he called a “personal agony.”

“Even amidst my emotion, I had to acknowledge those realities,” Monsignor Hartnett said. “It was very hard to detach myself from those two issues, but I had a responsibility to this plan.”

Cardinal Gibbons’ enrollment declined in recent years. Last year the school announced it would phase out its middle school and share some classes with Seton Keough.

Monsignor Hartnett said the Blue Ribbon Committee was given the list of consolidated schools a month ago, to make sure its plan was not compromised.

Bramble said the committee has a daunting task.

“I think certainly it is a significant challenge,” he said. “The primary reason is that it’s costly to educate young people. It’s very expensive for parents to send their kids to Catholic schools. Our challenge is how we can make these schools attractive and find a way so that there is tuition assistance there to give everyone who wants an opportunity to have a Catholic education to have one.”

When Archbishop O’Brien met with parish and school leaders last October, he told them of his visits to city schools.

“Any school I go into, it would just tear my heart out to think of any one of those children I would have to turn away next year from a Catholic education,” he said.

An overarching theme of the report is that there is room for students at designated receiving schools.

The report states that many families will see “the distance between their consolidated school and the nearest Catholic school with open seats is less than three miles away.”

A survey about bus transportation, particularly for consolidated schools, is anticipated.

What remains uncertain is the future of the approximately 325 employees at those schools. Those not carried over to receiving schools will have help from the archdiocesan human resources department and crisis response teams. In addition, the employee assistance program will be available.

“We’re going to try and put as many supports in place as we can,” Monsignor Hartnett said.

He called those employees, who often work in troubled neighborhoods, “heroic.”

“I know they’ve changed lives and that’s what makes this such a difficult thing to do,” he said.

For the reconstituted school system, the report includes descriptions of professional development opportunities for school leaders and the introduction of a new model of school governance.

He has approved the development of seven new academic and service programs, including a dual-language program at one elementary school and a PRIDE Plus program for students with special needs at several schools.

In addition, four Catholic middle schools will develop science, technology, engineering and math (STEM) programs, while one Catholic elementary school will introduce a Montessori program for ages 3 through 6. A New American Academy Model, created at Harvard University, will also be developed at one elementary school, integrating innovative teaching methods.

Four Catholic elementary schools will become community schools, where they will become hubs of activities for families, parishes and neighborhoods. That plan is being developed with Catholic Charities.

A study to determine the feasibility of implementing the International Baccalaureate Program at one or more Catholic high schools will be conducted.

“At this time of the year, in the Lenten season, it is very much like the paschal mystery acted out,” he said. “We’ve gone through suffering and there will be experience of death, but I also think there will be a resurrection.”