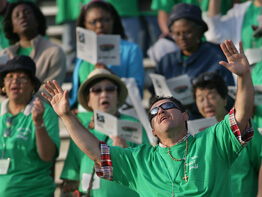 PASADENA, Calif. – Southern California’s largest rosary recitation in more than 50 years offered a broad cross-section of ages and ethnicities in the local Catholic Church, and a link to a storied tradition.

Some 50,000 people at the Rose Bowl in Pasadena May 19 prayed the rosary during the Rosary Bowl, an event sponsored by Holy Cross Family Ministries and its Family Theater Productions in conjunction with the Archdiocese of Los Angeles.

With the theme “A World at Prayer is a World at Peace,” the event continued the work of the late Holy Cross Father Patrick Peyton, the founder of Holy Cross Family Ministries. Before his death in 1992, Father Peyton conducted more than 40 events throughout the world reaching more than 28 million people.

Taryn Wilson, a member of Sacred Heart Parish in Lancaster, attended the Rosary Bowl with her son, Trenton, 16, and her mother, LaVelle. She said she was attracted by the idea of praying the rosary as a family.

“It is important for your whole family because the family that prays together, stays together,” she said, quoting Father Peyton.

The event began with music performed by, among others, Mario Reyes of the Gipsy Kings and included such speakers as Rwandan genocide survivor Immaculee Ilibagiza; Holy Cross Father Wilfred J. Raymond, national director of Family Theater Productions in Hollywood; Carl Anderson, supreme knight of the Knights of Columbus, and Auxiliary Bishop Oscar A. Solis of Los Angeles.

“Our world needs peace more than ever,” Bishop Solis said. “Our faith in God makes us firmly believe that peace is possible and promoting it is our common vision. We realize that there cannot be a possibility of peace without being united in prayer. So we are here to pray for the peace that Christ has promised and which the world cannot give.”

As the sunny afternoon shifted into a chilly evening, more than 300 young adults and people who represented different cultures and were dressed in traditional clothing from the country of their heritage processed onto the field and formed a living rosary in groups of six people.

During the recitation of the glorious mysteries, each adult leader took turns leading a Hail Mary in his or her language. The rosary prayers were offered in more than 40 languages. In between decades, guest speakers gave their testimony, including actor Jim Caviezel, Eduardo Verastengui, director of the upcoming film “Bella,” and Jacky Bracamontes, Miss Mexico 2000.

From St. Rose of Lima Parish in Simi Valley, Brian Simpson attended the Rosary Bowl with his wife, Pauline, daughters Madeline, 15, and Rachel, 9, and his son Joshua, 13, as well as his mother-in-law, Josie Dahlstron of St. Ignatius Parish in Highland Park, and his aunt, Lulu Kelley.

“I thought they would be bored, but they aren’t,” Simpson said of his children. He said he decided to go and bring his family “just to get closer to my faith.”

“I was raised Catholic and you have to teach the kids,” he told The Tidings, newspaper of the Los Angeles Archdiocese. “My wife’s mother has been praying the rosary forever. We just want to keep it going.”

Reflecting on the day’s Gospel reading, Cardinal Roger M. Mahony of Los Angeles said that as when Jesus told the disciples to go into the whole world and make disciples of all people, participants are “called in a new way to make the rosary a central part” of their lives.

“Tonight we are disciples of Jesus and we are Catholics,” Cardinal Mahony said. “So I ask all of you who are here, whether you be children, young people, young adults, adults or older people like myself, when we go from here, let us take with us a great love for the rosary.