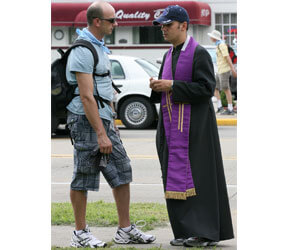 ALBANY, N.Y. – Monsignor Kevin Irwin says that hearing confessions is “one of the most humbling experiences of my priesthood.”

The dean of the School of Theology and Religious Studies at The Catholic University of America in Washington, he recently reflected on the current state of the sacrament of penance. For years, surveys have shown infrequent -if any – use of the sacrament by Catholics. One recent survey found that 45 percent of Catholics who attend Mass weekly never go to confession.

Monsignor Irwin told Catholic News Service he suspects there are several reasons for that, including “fear of what the priest might say and shame at what one has done or failed to do.”

Father Rick Hilgartner, a Baltimore native and executive director of the U.S. bishops’ Secretariat of Divine Worship, believes that some Catholics stay away because of “fear or embarrassment about a particular sin.”

“I would offer, in reply, that there is no reason to be afraid. For others, there might be a false sense that confession is not really necessary, either because they don’t think they have sinned, or they don’t need forgiveness,” he said. “(But) each of us has sin in our lives; it is part of what it is to be human.”

Both priests see many reasons people should take advantage of confession. For one thing, Monsignor Irwin pointed out, it provides the opportunity “to assess where one is before God and each other” through an examination of conscience.

Other pluses of confessing, he said, include “naming what is good and wrong in one’s life,” and the opportunity of “gaining insight into the ways one should look at life and live.”

Because they believe that priests are key factors in reviving the use of the sacrament, the two clergymen have advice for their peers.

“We need to reassure the faithful that the point of the sacrament is not to be chastised or punished,” Father Hilgartner told CNS, “but to experience the healing love and forgiveness of Jesus. We need to be inviting and encouraging.”

Likewise, Monsignor Irwin encourages clergy to “invite penitents to use the options in the rite of penance more fully, for example, by asking them to bring a Scripture reading with them to discuss as a lead-in to confessing sins.”

He recommends that Catholics “go regularly to the same priest so that the rapport is easier, and the knowledge of failings and their severity can be assessed more adequately. When priests ask penitents what they might recommend as a penance, then what the penitent is asked to do fits their particular need.”

As a result, the penance assigned by the confessor becomes “an antidote to what one confessed. Contrition is the most important part of the sacrament.”

In preparation for confession, Monsignor Irwin suggested that Catholics “read and reflect on Chapter 12 of Paul’s Letter to the Romans.”

Father Hilgartner pointed out that “there are lots of resources, including a new iPhone app, that can be a helpful guide to the faithful through this process of reflection and examination. In general, it is good not only to reflect on the Ten Commandments, but also to look at significant relationships – with God, with others and with self – in order to identify what actions or inactions have been hurtful or sinful.”

Confessors, he continued, should “listen attentively and respond as Jesus would, which might include some advice or encouragement.”

Similarly, Monsignor Irwin urges priests to “act as a divine physician, diagnosing what is really wrong, guiding the penitent to see it and praying with the penitent over it.”

Lent, he continued, provides a way for Catholics who have been away from the sacrament of penance to experience it again. “Communal celebrations of the sacrament seem to have taken hold as features of Lent and Advent,” he noted. “These are often occasions for people who have not come for a long period to jump-start a return.”

In addition, such communal events help people “see that penance involves the community and is not just about themselves before God,” he said.

Monsignor Irwin believes that Catholics who return to confession might be surprised at the changes that have occurred in the sacrament in recent years, such as the option of facing the confessor in the open, the reading of Scriptures and “a declaration of thanks for God’s mercy.”

His experience with penitents, Monsignor Irwin said, “is one of the most humbling experiences of my priesthood. When you hear of the burdens people bear, you are simply amazed, sometimes saddened, but always heartened that you can help to unburden them.”