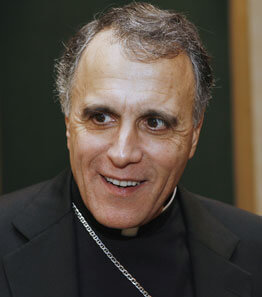 ROME – In the few days immediately before he was to receive his red hat, Cardinal-designate Daniel N. DiNardo of Galveston-Houston tried to relax as he also made time for quiet prayer, his family and a wardrobe check.

The Texas media turned out in force Nov. 21 when he went to the small but famous shop of Gammarelli, the ecclesiastical tailors.

“I had a final fitting,” the cardinal-designate told Catholic News Service. “It looks very fine.”

The tailors, who also sew for Pope Benedict XVI and most of the 22 other prelates who will be inducted into the College of Cardinals Nov. 24, will make a few adjustments to the Texan’s two new outfits and will deliver them.

With sartorial obligations resolved, he could breathe a sigh of relief.
“This morning I’ve been doing some spiritual reading with God’s word; I’m taking time out for that,” he said.

The other key moment of spiritual preparation will be an early morning Mass Nov. 23 in the grotto of St. Peter’s Basilica with a very small group of family and friends.

“Mass at the tomb of St. Peter is always a beautiful experience, and it is an important part of my preparation as I’m about to become a cardinal, called to offer closer assistance and support to the Holy Father,” he said.

But he also wants to spend time with the 400-member pilgrimage from the Archdiocese of Galveston-Houston and smaller groups from his former Diocese of Sioux City, Iowa, and his native Pennsylvania.

“There are elements of the preparation that must be done in quiet,” he said, but celebrations with the pilgrim groups also are important.

Cardinal-designate DiNardo said he had no idea if his 10 years as a bishop is an exceptionally short period of time compared to the other new cardinals, but he does know his way around Rome and the Vatican.

He was an official at the Congregation for Bishops, 1984-1990. While his preconsistory to-do list included stopping by the congregation, he said very few of his former colleagues still work there.

He and the other cardinals-to-be were to get a little preview of their lives as members of the college and advisers to the pope during a Nov. 23 all-day meeting. Pope Benedict asked that all the cardinals – old and new – focus on the state of the Catholic Church’s ecumenical relations during the meeting’s morning session, while he has left the afternoon session open for a free discussion.

Then it would be back to the pilgrims, to Masses, receptions and photographs of his brand new, perfectly fitted, tailor-made cassocks – one black with a red cummerbund and red piping, the other pure red.