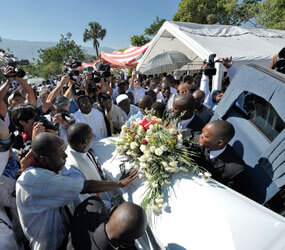 PORT-AU-PRINCE, Haiti – Amid the rubble of the Cathedral of Our Lady of the Assumption, Haitians celebrated the lives of the archbishop and vicar general of Port-au-Prince, both of whom were killed in the country’s earthquake.

Church officials – including some from the United States – joined Haitians Jan. 23 for the funerals of Archbishop Joseph Serge Miot, who died when the impact of the Jan. 12 quake hurled him from a balcony, and Monsignor Charles Benoit, the vicar general whose body was pulled from the cathedral debris.

They were among more than 150,000 Haitians killed in the magnitude 7 quake; U.N. officials have said the final death toll might never be known.

Haiti President Rene Preval was among those in attendance.

New York Archbishop Timothy M. Dolan, who represented the U.S. bishops at the Mass, read a message on behalf of Chicago Cardinal Francis E. George, U.S. bishops’ conference president. Cardinal George’s message to the Haitians was contained in a letter was addressed to Archbishop Kebreau.

“The church in the United States stands with you,” he said.

“In our prayer, we recall that Jesus, too, wept before the tomb of one whom he loved,” said the cardinal’s message. “With you, we recall in trust that he is the resurrection and the life, offering himself to us and calling us to himself, even in our darkest hour.”

“In the United States, our televisions, computers and newspapers have been filled with images of your unspeakable pain, suffering and loss,” he told them. “Each hour we see the faces of the widows and orphans and all of those who have lost family and friends and all of their life’s possessions.”

He said the U.S. church was committed to “doing everything we can so that you may rebuild and renew and begin again your lives of faith and family and service to Haiti.”

Archbishop Dolan, who also serves as chairman of the board of Catholic Relief Services, was accompanied by Monsignor David Malloy, general secretary of the U.S. bishops’ conference.

Back in New York Jan. 25, Archbishop Dolan described the funeral to Catholic News Service as “a therapeutic and holy occasion to grieve.”

“There was a longing for the community to express sorrow,” he said.

Archbishop Dolan said that while standing in front of the devastated cathedral he noticed the crucifix that stood at the front of the building appeared to be untouched.

“It brought me to tears, this crucifix, rising tall in this darkness … rising from this cosmic ‘why’ groaning from the Haitian people. It was a very powerful symbol,” he said.

Bishop Wenski told Catholic News Service Jan. 25 that Bishop Lafontant, in his homily, told the hundreds gathered that the funeral was not only for the deceased clergy, but that it represented funerals for the thousands of other people who died in the disaster and had not had a proper funeral.

“He said this was not the wrath of God, but it does call us to responsibility to build a new Haiti in which people will have hope and prosperity,” Bishop Wenski said.

Archbishop Miot’s body was one of the first recovered after the earthquake. Archbishop Bernardito Auza, papal nuncio to Haiti, asked that it be taken to the coastal city of St. Marc because there was no electricity in Port-au-Prince. Local clergy asked that the archbishop’s funeral be at the cathedral.

A statement from Caritas, the church’s network of charitable aid agencies, said when Monsignor Benoit’s body was found, his hands were around a reliquary with a host inside.

The archbishop and the vicar general were buried in Lilavois Cemetery in the Haitian capital.