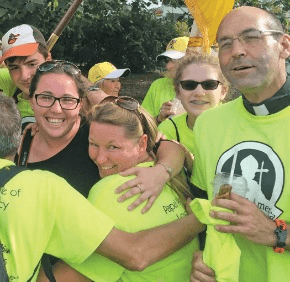 It was late Sunday night at the old parish school at St. Philomena in Lansdowne, Pa., and I was ready to drive back to Baltimore when Father John J. Lombardi led another round of witness.

After I babbled something inconsequential, the woman sitting to my left, on the floor, brought it all home: “We gave people another picture of Baltimore.”

Five months to the day after I had reported from the funeral of Freddie Gray Jr., Mary Bergin made a connection Sept. 27 I had not during the eight-day Feet for Francis/Pilgrimage of Love and Mercy.

Mary sees things that others do not, and attempts things others not dare.

A Baltimore native, Mary graduated from the former Seton High School in the late 1970s. She has never been licensed to drive, and walks from her home in Hampden to the Cathedral of Mary Our Queen in Homeland, where her husband is on the staff, and her home parish of St. Thomas Aquinas, the base of the pro-life work that is her passion.

Mary Bergin takes a break during the walking pilgrimage from Baltimore to Philadelphia. (Paul McMullen/CR Staff)

A counselor with Helpers of God’s Precious Infants of Maryland, Bergin was awarded the Archdiocese of Baltimore’s Culture of Life Medal in October 2012. She respects life, and exudes it.

Two months ago, Father Lombardi shook his head at my suggestion that I walk every step from the Basilica of the National Shrine of the Assumption of the Blessed Virgin Mary to the papal Mass in Philadelphia, the first of many instances of my not listening to him.

After three days of walking every step with Mary, Tony Antenucci and Bob Williams, I gave up that quest. At some point, Bob needed to ride in a support van. When no one was paying attention, Tony hopped in a van. He sacrificed for Mary (pictured at left), to elevate her message of walking in penance, for herself and others. She was the only pilgrim who trod every step of what turned out be a 110-mile pilgrimage.

Among the other strong women who picked me up was Maureen Cromer, the Catholic Review’s 22-year-old social media coordinator and a 2011 graduate of The Seton Keough High School. (Disclosure: I am the vice chairman of its school board.)

Maureen began the week with scant journalism experience. She photographed our departure from the basilica, and then our arrival at The John Carroll School in Bel Air on day two. On our day three, she covered Pope Francis’ U.S. arrival in Prince George’s County. On our day four, she photographed the canonization Mass in Washington, D.C. She camped out with us under gym roofs on our days five and seven.

Her fatigue manifested itself on Baltimore Pike Sept. 26, when she was involved in a minor fender bender. The mistake was mine, as I should have had her in one of the support vans that moved NBC Nightly News and the Washington Post. As the photo above shows, the accident turned into another moment of grace.

To view a video of Bergin and other pilgrims praying outside a Planned Parenthood Clinic in Chester County, Pa., click here.