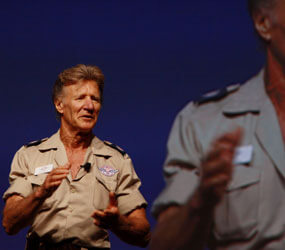 NEW ORLEANS – Fifteen years in the Amazon rain forest and a stint on the “Wild Kingdom” television show ultimately brought Stan Brock to a different sort of adventure: providing medical, dental, vision and even veterinary care to hundreds of thousands of people and animals who need it.

The Welsh-born Brock is founder and CEO of Remote Area Medical Volunteers Corps, originally founded to bring medical treatment to the Wapishana Indians in British Guiana (now the independent nation of Guyana), among whom Brock lived as a teenager and young adult.

But the all-volunteer organization he established in 1985 now devotes the majority of its time to the uninsured and underinsured throughout America.

“The need here is so great that, except for a year-round operation where I used to live, all of our focus now is in the U.S.,” he said.

Brock’s talk June 8 to participants in the Catholic Health Association’s annual assembly in New Orleans was peppered with colorful stories and jokes about his time as a “vaquero,” Portuguese for cowboy, on the largest tropical cattle ranch in the world.

He recalled Kang, his horse on the ranch. Before Brock first tried to ride him, two other cowboys had been killed trying to ride him.

He noted that “the nearest doctor was 26 miles away,” a distance that had to be traveled by foot because horses could not survive in the rain forest where there was no food for them.

As he prepared to ride Kang for the first time, “it was about that time that I got the idea for Remote Area Medical,” Brock said, to laughter from the audience. “But it took years to get that idea into motion.”

Brock learned to fly despite “never having been any higher off the ground than the back of a horse,” helped the Wapishana Indians build a landing strip, and began bringing in medicines and flying the injured or ill to Georgetown, the capital.

After 15 years “in virtual isolation” among the Indians, Brock was brought to Chicago, where “Wild Kingdom” was produced, and became a co-star of the wilderness/adventure series and an expert on wildlife conservation and management.

Brock said he was so naive when he moved to Chicago that he “gave a $1 donation to the Black Panthers because I thought it was to preserve an endangered species.”

But he also noticed in the United States that “there were people like the Wapishana everywhere, people that didn’t have health care.”

Brock recently led his 571st expedition to bring health care to underserved populations, and he estimates that some 420,000 people have received care from the dentists, doctors, ophthalmologists and other professionals who volunteer their time and often pay for their own travel, lodging, meals and medical supplies.

Most of those who receive assistance are not unemployed, but may lack dental or vision coverage or have a high deductible that they cannot afford, he said.

No one receives a salary from Remote Area Medical, not even Brock, who lives at the organization’s headquarters, a former elementary school in Knoxville, Tenn.

The greatest challenge facing him today is not a lack of volunteers or funds, which come from donors, but state laws that prevent medical professionals from practicing medicine across state lines.

Brock said he knows physicians who are willing to help the neediest in areas other than their own but are not allowed to.

“They can’t use the skills and compassion they have in another state,” he said. “They can’t do that in America, and that has to change.”

He urged the Catholic health leaders at the assembly to work to change laws “so that doctors can cross state lines” and to protect medical volunteers from frivolous lawsuits.