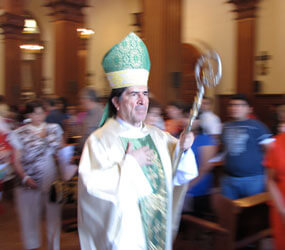 CIUDAD VICTORIA, Mexico – Bishop Antonio Gonzalez Sanchez of Ciudad Victoria cast a vote early July 4. He later urged others to do the same, despite the rampant violence in his home state of Tamaulipas where, six days earlier, the leading gubernatorial candidate, Rodolfo Torre Cantu, was assassinated.

“We want people to be good citizens and that means voting,” Bishop Gonzalez said.

His call to vote – echoed by Catholic leaders in the other 11 states holding elections – largely went unheeded in Tamaulipas as more than 70 percent of the electorate stayed home, although some Catholics said they would not be deterred.

“Voting fulfills my civic duty,” said retiree Fernando Mendez Cantu after attending Mass. He added glumly, “This used to be a civic celebration, but it’s been clouded.”

Residents in many other parts of Mexico heeded the calls, however, and delivered historic results – most notably in the southeastern states of Oaxaca and Puebla, bastions of one-party rule notorious for the lingering authority wielded by local strongmen known as caciques.

In Oaxaca and Puebla, mega-coalitions of the Catholic-friendly National Action Party and three smaller parties toppled Institutional Revolutionary Party governments that had been in power for more than 80 years. The coalitions also won in the Pacific state of Sinaloa and narrowly lost two other races in Durango and Hidalgo.

Political observers described the outcomes – which occurred despite rampant electoral vices such as vote buying and voter intimidation – as long-overdue steps in Mexico’s democratic transition from having one-party rule to having power alternate between competing parties. That principle took hold on the federal level in 2000 but had not been embraced on the state level.

“Democracy won” in the elections, said political science professor Aldo Munoz Armenta of the Autonomous University of the State of Mexico.

The elections, he said, ousted repressive governments from the last two states that practiced the widespread political persecution of the opposition and social movements and where one-party rule had persisted.

Catholic leaders in Oaxaca, where two priests working with social movements have been attacked over the past six months, welcomed the electoral outcomes.

“The people have defeated a great tyranny,” said Father Wilfrido Mayren Pelaez, director of the peace and reconciliation ministry of the Archdiocese of Antequera-Oaxaca.

“People have shown civility and respect during the election,” he added.

The elections generally were generally peaceful in Mexico, and postelection disputes were expected to be minimal.

The outcomes defied many of the pre-election fears expressed by political observers and church officials that the contests would descend into rancor and organized crime would try to unduly influence the process.

Bishops across Mexico had released a flurry of statements – especially after the Torre assassination – calling for citizens to vote.

In Chihuahua, where the death toll has topped 1,400 in 2010, all seven bishops urged participation and called it a sin not to vote. In the neighboring state of Durango, Archbishop Hector Gonzalez Martinez echoed those sentiments.

In Oaxaca, church leaders called for residents to vote, but also for an end to vote-buying, coercion and using social programs for electoral ends.

“These practices … mark a regression on the road toward democracy and impede the maturation of the society,” Archbishop Jose Chavez Botello of Antequera-Oaxaca said before the elections.

Examples of the electoral vices in Oaxaca included taxi drivers being required to put advertisements from the incumbent party on their vehicles; poor farmers being offered cash, cement and building materials for their votes; and social program recipients being required to brandish voter identifications prior to receiving service – a common voter-intimidation practice.

Taxi driver Jordan Hernandez said his concession owner fined him $15 for not putting electoral propaganda on his vehicle. He paid the fine to maintain his permit but refused to be intimidated.

Church officials in Oaxaca say the challenge now is healing the rifts of a bitter campaign – and 80 years of repressive rule.

“There’s a great desire now for peace and reconciliation,” he said.