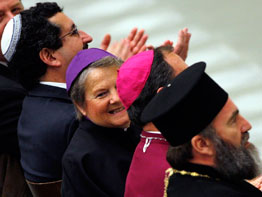 VATICAN CITY – In Rome, like in any other diocese, the search for Christian unity is fueled by the prayers and friendships of neighbors and their local pastors.

Each year the bishop of the Diocese of Rome – the pope – hosts other Christian leaders at a Jan. 25 prayer service marking the end of the Week of Prayer for Christian Unity. But the faithful of his diocese have a full schedule leading up to the final night.

Father Marco Gnavi, director of the Rome diocesan office for ecumenical affairs, said, “Rome is a unique diocese ecumenically, first of all because of the presence of the pope, but also because of the variety of Christian communities represented and because of the numbers of centers and movements that focus on unity.”

One of those is the Centro Pro Unione, a dialogue and study center operated by the Franciscan Friars of the Atonement, the group that gave birth to the week of Christian prayer 100 years ago in Garrison, N.Y.

Father James Puglisi, director of the center and minister general of the order, said the week of prayer began as a local observance, and its celebration naturally depends on local circumstances, including how many different Christian communities are present in a given city and how well their members get along during the year.

The grass roots “is where the unity of the church is being built up through concrete pastoral initiatives that promote collaboration, respect for one another and recognition of one another as brothers and sisters in Christ,” he said.

The leadership and guidance of the pope and the Vatican, especially in theological dialogue, are an essential part of ecumenism, he said, “but real work is going on locally where people know each other, help one another and pray with each other.”

Speaking at his Jan. 23 general audience about the week of prayer, Pope Benedict XVI said greatly improved relations among divided Christians have been the result of a multifaceted approach “from mutual understanding to fraternal contact among members of different churches and ecclesial communities, from increasingly friendlier conversations to collaboration in various fields, from theological dialogue to the search for concrete forms of communion.”

Even those responsible for the Catholic Church’s ecumenical relations at the highest levels say they would not and could not do what they do without the personal friendships that are built through prayer and dialogue.

Cardinal Walter Kasper, president of the Pontifical Council for Promoting Christian Unity, said ecumenism requires “spiritual empathy” and a willingness to understand other Christians’ prayer and community life “with the heart.”

Speaking Jan. 24 at the Centro Pro Unione, he said, that where trust and friendships are not established “everybody is sufficiently intelligent to find objections to the arguments from the other side,” and dialogue goes nowhere.

One sign that the friendship is not limited to official events is the fact that throughout the week Fathers Gnavi and Puglisi and the entire staff of the pontifical council lead or participate in many of the dozens of prayer services and conferences organized by parishes, centers and movements in Rome.

Monsignor Donald Bolen, the council official who works with Anglicans and Methodists, said that once you begin to recognize the faith and spiritual gifts of your dialogue partner, “the notion of praying together in appropriate ways becomes not an obligation, but something one desires to do.”

He and the Rev. Trevor Hoggard, pastor of a Methodist church near the Vatican, organized a Jan. 21 ecumenical prayer service based on the Methodist covenant service, which includes a renewal of baptismal promises.

“Organizing this service wasn’t work; it was something I was very happy to be part of, nourishing my own faith and providing Catholics and English-speaking Christians from other communities the opportunity to encounter this gift from Methodism,” Monsignor Bolen said.

“We all know that unity is not something you orchestrate from the top. It is the work of the Holy Spirit and is brought about in all sorts of ways, in all aspects and levels of our ecclesial lives,” the monsignor said. “If nothing happens on a local level, where people live, then our work really is of questionable value.”

Father Gnavi said that while the Rome diocesan events do not capture the media attention given to the papal and Vatican events, “what happens all year on a local level is essential. It weaves a fabric that supports the more visible events and involves thousands of people.”